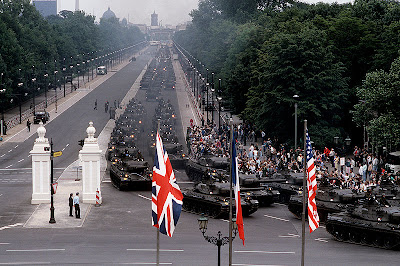 With the initial plans for the defeat of Germany during the Second World War, there were concerns amongst allied planners in regards to giving the French an area of German territory to control in the post-war world. Given the historical quarrels between the two nations and three wars within the past seventy years these assumptions were well founded. Allied planners also took into account that the military forces of the United Kingdom, United States and Soviet Union had bore the brunt of fighting the war while French military forces had carried out a minor role in the war. The leader of Free French forces in Exile, Charles de Gaulle argued for a role for France in rebuilding post-war Germany and finally allied planners agreed to give parts of the western zones of both the American and British designated zones of occupation over to the French. This partitioning of Germany gave the French a zone of administration in the western most part of the country consisting of two areas along the French border that only met one another at a single point along the Rhine River. Also granted to the French military administration in post-war Germany was a section of Berlin, specifically the northern most districts of the city.

French forces positioned in Germany following the end of hostilities were effectively known as Troupes d´Occupation en Allemagne or Occupation Troops in Germany. The Troupes d´Occupation en Allemagne  were headquartered out of Baden Baden. They were remain under this title until 10 August 1949, when French military forces in Germany were reorganized and re-designated as Forces Françaises en Allemagne. All occupation duties effectively ceased when the Bonn Convention took effect on 26 May 1952 after the establishment of the allied recognized West Germany. These accords were amended further on 23 October 1954 with the Paris Agreements. It was established that the French Commander in Germany was also to serve as the Commander of French Education in Germany and with the assistance of the Academy in Strasbourg, schools were established in the French areas of Germany to accommodate the children of soldiers stationed in Germany. 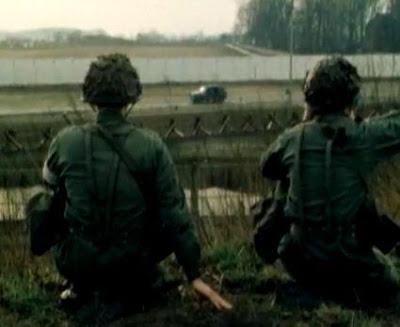 Under the 1960 Double Keys agreement, French forces were authorized U.S. supplied nuclear weapons as part of the larger NATO deterrence. Nuclear weapons were to be delivered by SNCASO SO-4050 Vautour and North American F-100 Super Sabre fighters of the French Air Force. French Army mechanized divisions maintained ten batteries of MGR 1 Honest John  missiles in 1966 and eight batteries of MIM-14 Nike Hercules surface to air missiles were maintained by the 520 e and 521 e Brigade d`Engins '520th & 521st Engineer Brigades' in  Baden-Württemberg. At the height of the Cold War, French forces stationed in Germany maintained a personnel strength of 50,000 soldiers in 24 military garrisons.

Following disagreements over force projection, on 7 March 1966 Charles de Gaulle announced to American President Lyndon Johnson that France would be withdrawing its forces from under the NATO command structure. The status of French forces in Germany was amended on 21 December 1967 with a separate agreement between the governments of France and West Germany following the withdrawal from NATO. The French withdrawal from the NATO command structure along with the subsequent order for all American forces to vacate French territory greatly strained France's relationships with the western Allies however, these relationships would improve with time. Although not effectively under NATO's command structure; French forces under an agreement between Charles Aillert, the French Army Chief of Staff and Lyman Lemnitzer, Supreme Commander of Allied Forces in Europe were understood to be available for military operations in support of the alliance in the event of the invasion of western Europe. It was to be understood that French forces would remain completely autonomous. This agreement took effect on 22 August 1967.

The year 1976, saw the withdrawal of nearly 10,000 French soldiers from West Germany. The late 1970s and early 1980s saw increased French commitments to the defense of Germany with the troisième corps d'armée '3rd Army Corps' created in Lille positioned along preassigned guidelines in the Rotterdam-Dortmund-Munich line agreement that prohibited the French movements in Germany. France and Germany amended their mutual miltary and security agreements outlined in the bilateral Elysée Treaty in October 1982. As policy following the 1966 NATO withdrawal, no more than one French military unit participated in allied operations, the gradual rewarming of relations with the western Allies saw three units of 500 men participating in Exercise Franconian Shield in September 1986 and 20,000 soldiers participating in the Rapid Reaction Force exercise, Exercise Bold Sparrow in September 1987. Forces Françaises en Allemagne maintained a force of 600 AMX-30 Main Battle Tanks in Germany with another 850 positioned in France.

With the fall of the Berlin Wall in 1990, French President François Mitterrand announced the withdrawal of 46,000 French troops from Germany to be effective 18 September 1990. Allied Command Berlin ceased to exist in October and the four partitioned nature of the city was abolished. Forces Françaises en Allemagne  underwent through realignment and reorganization on 21 December 1991 and were replaced by Forces françaises stationnées en Allemagne ' French Forces stationed in Germany' a force which numbered 25,000 soldiers. 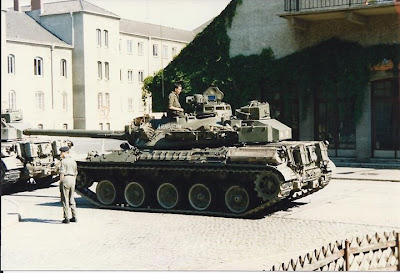