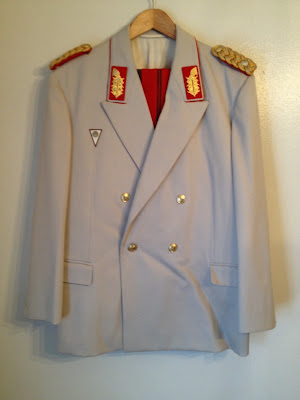 The uniform shown here is comprised of the Gesellschaft jacket and trousers. The Gesellschaftanzug or Social Dress was authorized for wear during formal or social occasions. The Gesellschaft uniform was worn by both officers & generals and was worn with white shirt, gray Nationale Volksarmee tie, the stone gray trousers with the red stripe or colored waffenfarben of the respective service branch, dress shoes and visor cap. The wear of the visor cap varied depending on the occasion or event attended by the General. 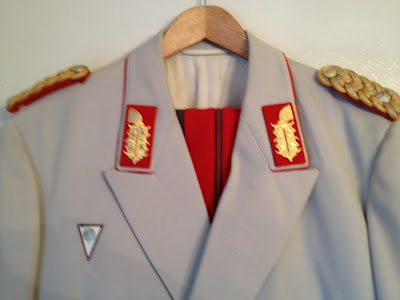 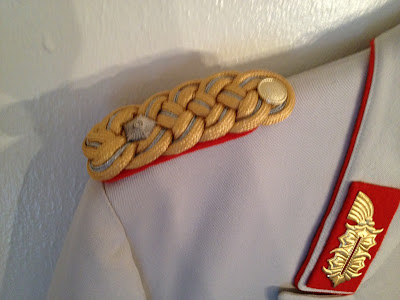 The Generalmajor rank is denoted by a single five pointed silver star mounted on a gold and silver braided shoulder cord set against a bright red base. On the left of the jacket, a ribbon bar or medal bar would be worn each individually suited to the General officer wearing the uniform, with the cloth ribbons being assembled in the proper order of precedence and then stitched onto a cloth backing that matches the overall material of the jacket. The whole thing is then stitched down onto the surface of the jacket. 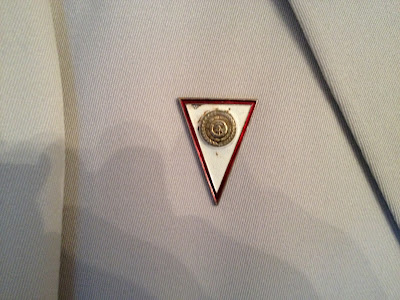 The triangular shaped academy badge designates that the wearer was a graduate of one of East Germany's many service academies. The Nationale Volksarmee had a vast assortment of military academies with the Friedrich Engels Academy serving as East Germany's premier military academy. Although some graduates of the Friedrich Engels Academy did rise through  the ranks to attain the rank of the General officers, it was way more common to see East German general officers wearing Soviet academy badges as many were sent to the Soviet uniform for higher education. 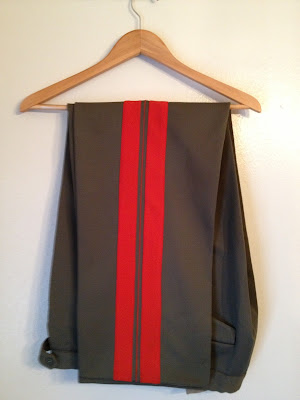 The pants of the Gesellschaftanzug, which are generally the same stone gray trousers worn by National Volksarmee personnel with the red striping running along the length of the leg signifying the wearers status as a General officer.
Posted by Unknown at 4:29 PM