Nuclear War in the West: Seven Days to the River Rhine 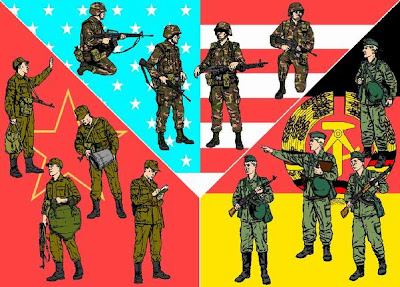 As the Cold War intensified by the end of the 1950s, both sides because entrenched and battle lines became drawn across continents. Fortunately, through limited diplomacy these battle lines were more so ideological with both sides formulating extensive battle plans for the event of war with the other. These battle plans would be theorized, revised and rehearsed numerous times paving the way for large scale field training exercises on both sides of the Iron Curtain. The United States Army's forces in Germany annually conducted the REFORGER or Return of Forces to Germany exercises and the British conducted exercises of their own such as Exercise Lionheart. Often in these military exercises allied military units from other nations would also participate to practice interoperability and enhance military cooperation and training.

As a response to these military exercises, the Soviet Union often staged large wargames of their own with Warsaw Pact militaries.

In 1979, a top secret military simulation exercise was developed by Soviet and Warsaw Pact military theorists. The plan involved combined forces of the Warsaw Pact, Group of Soviet Forces Germany and Soviet Army Northern Group of Forces in an envisioned seven day nuclear war scenario between NATO forces in western Europe and Warsaw Pact armies. The plan known as Seven Days to the River Rhine would involve Soviet and Warsaw Pact forces invading West Germany through East Germany and Czechoslovakia with the objectives of gaining large amounts of territory in West Germany, Austria, Denmark and the Netherlands along the eastern bank of the Rhine River. The plan technically was not an invasion plan, but a counterattack plan with NATO forces initiating the war.

In the plan, Soviet military planners envisioned NATO commanders launching tactical nuclear weapons on the Vistula River valley in southern Poland in a first strike scenario. This strike would prevent Soviet commanders from deploying additional forces and reinforcing positions in the German Democratic Republic thus rendering them unable to prevent or halt a NATO invasion of East Germany. With the impending capitulation of the German Democratic Republic, it was calculated by Warsaw Pact planners that roughly two million Poles, all of which were designated as Polish civilians in the Warsaw Pact battle plan would perish in the war and the Peoples Republic of Poland would effectively be destroyed. It was unnoted just how many East German citizens and citizens of allied nations would perish in the nuclear assault. It is also uncertain of the numbers of soldiers that Warsaw Pact planners predicted would be killed in the fight. In retaliation, the Soviet military would authorize a counter strike against targets in West Germany, Belgium, the Netherlands and Denmark to route or halt the NATO invasion force. 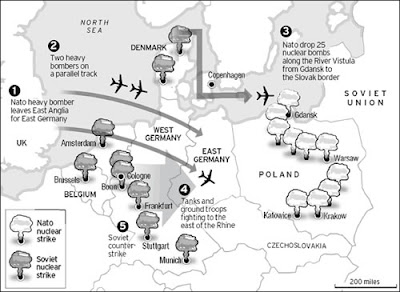 What was unique about the Soviet battle plan was that while West Germany, Belgium, the Netherlands and Denmark were marked as targets for nuclear tactic, France and the United Kingdom were not zeroed in for nuclear attack by Soviet commanders. It is believed that the Soviets did not target them because it was known that the British and French maintained nuclear weapons stockpiles of their own and would therefore launch retaliatory nuclear strikes of their own against targets in the Soviet Union. French military police employed their own retaliatory strike plan known as Dissuasion du faible au fort essentially the Weak to Strong Deterrence in which a nuclear attack on French soil would be responded to by a nuclear strike directly on cities on Russian soil. It has also since been theorized that France was spared nuclear attack as its armed forces were not integrated into NATOs command structures.

It is speculated that Britain was not included in the seven day plan as, Soviet high command in Moscow wanted to halt at the banks of the Rhine, to regroup and resupply its forces and prevent its forces from overstretching themselves and their supply lines. It was also speculated that this maneuver was also to stop and allow the Soviets to negotiate a ceasefire and thus gain complete control of Germany and parts of western Europe while giving the Soviets influence and territory in both France and the United Kingdom's backyards.

If the events that the negotiations failed, Soviet Air Forces would launch conventional airstrikes against targets in the United Kingdom primarily airfields such as RAF Fylingdales, RAF Mildenhall and RAF Lakenheath to prevent long ranged fighter bombers such as United States Air Force Europe assigned F-111 Aardvarks from conducting further nuclear strikes against Soviet forces or against Soviet territory. Although nuclear weaponry would be much more effective and was highly favored by the Soviet leadership it was omitted in the battle plan.

Soviet military planners theorized that 7.5 Megatons of atomic weaponry would be utilized on the attacks on NATO countries in western Europe during the conflict. Vienna, Austria was designated to be hit by two 500 kiloton nuclear bombs, while Vicenza and Verona, Italy were to be hit by single 500 kiloton nuclear weapons. Vicenza located in northern Italy, was home to the United States Army 173rd Airborne Brigade. Military forces from the Peoples Republic of Hungary were to then move into position to capture Vienna, Austria and part of northern Italy following the completion of the nuclear strikes. Simultaneously, the cities of Stuttgart, Munich and Nuremberg all cities containing large American military garrisons were to also be destroyed by nuclear weapons before being captured by forces from the Czechoslovak Socialist Republic. 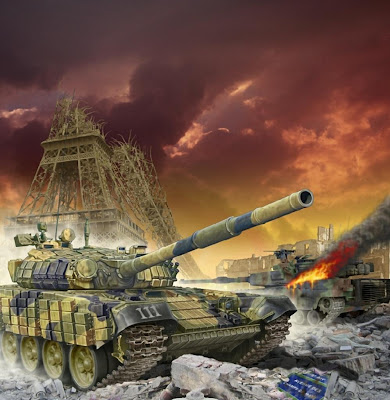 Other targets marked for destruction by Soviet nuclear forces included Hamburg, Frankfurt am Main, and Munich in West Germany, and Antwerp and Brussels in Belgium. Soviet nuclear warheads were much larger than their NATO counterparts because their launch platforms were relatively inaccurate. Soviet military planners also theorized that Prague, Czechoslovakia and Warsaw, Poland were to have been destroyed. The primary means of employing nuclear weapons by the Soviets was to be the RSD-10 Pioneer intermediate range ballistic missile designated as the SS-20 Saber by NATO. At the time of the planning of the Rhine scenario, Soviet forces had these forces positioned in eastern Europe aimed at western cities. At the same time the Soviet intelligence service the KGB was conducting disinformation operations by funding anti nuclear demonstrations in western nations to prevent the deployment of American deterrent missiles in a similar fashion.

The Soviets also had further plans involving scenarios further beyond the initial seven day battle plan. In the belief that NATO forces would largely be on the retreat from overwhelming Warsaw Pact forces, Soviet commanders theorized that they would reach and secure the city of Lyon by the 9th day of the war before reaching their final positions at the Pyrenees Mountains along the border with France and Spain.
Posted by Unknown at 3:28 PM