The Trump Card of the Party: Volkspolizei-Bereitschaften 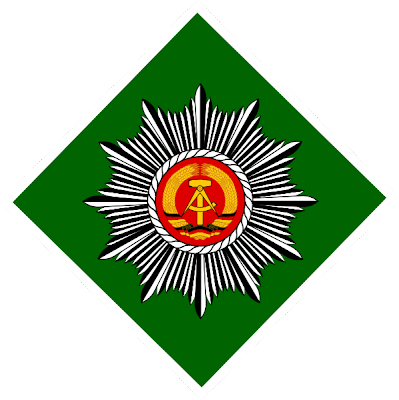 The Volkspolizei-Bereitschaften  or 'People's Readiness Police' were the militarized units of the Volkspolizei in the German Democratic Republic. Essentially, the East German equivalent of a SWAT or special tactics team,  these units were highly motorized and tasked with maintaining public order and quelling uprising as well as matters of civil unrest.

In 22 September 1948, the Soviet Military Administration in Germany formed the Alert Police officially designated as 'Bereitschaftspolizei'. This unit was designed as a force of armed units housed in barracks and trained in military fashion. These units were organized and equipped in a manner reflective of Landstreitkräfte motorized infantry forces. The force consisted of forty units of anywhere between 100 to 250 men each, which were subsequently subordinated to provincial authorities. Initially many of the officers and men recruited into these units were among German POWs held in the Soviet Union.

In November 1948 the German Interior Administration or Deutschen Verwaltung des Innern, took responsibility over the force as well as  the border troops and included them in section which would be named Hauptabteilung Grenzpolizei und Bereitschaften 'HA GP/B'. The section was first renamed to Verwaltung für Schulung 'VfS' on August 25, 1949, and then to Hauptverwaltung für Ausbildung 'HVA' on October 15, 1949 and finally to the Kasernierte Volkspolizei 'KVP' on 1 June 1952. In addition to ground troops, HVA and KVP also included a separate naval and air arm. By December 1952, KVP membership was recorded at up to 90,250 men. The communist party and Soviet military authorities exercised strict ideological control over the force.

On 1 March 1956 the Kasernierte Volkspolizei units were transferred over to the become the newly established defense force of the German Democratic Republic, the Nationale Volksarmee.

Separately, the East German Ministry of the Interior maintained, from 1960 an independent Department of the Alert Units of the Volkspolizei which would be officially known as the Volkspolizei-Bereitschaften. This service consisted of a force numbering between 12,000 and 15,000 men organized into 21 Volkspolizei alert units of battalion strength. In the vicinity of East Berlin, there were six of these units ready to respond to orders from the East German government. There was usually one unit per district of East Germany but the key districts of Halle, Leipzig and Magdeburg, with their large working class populations, and Potsdam all had two units.

In 1962, these units were reorganized into several independent battalions, separate of the service branches of the standard East German Volkspolizei. It would serve as the East German counterpart to the West German Bundesgrenzschutz, France's National Gendearmerie or Italian Carabinieri. With the instatement of conscription into the East German armed forces by the communist government, service in the paramilitary services of East Germany the Volkspolizei-Bereitschaften, Grenztruppen der DDR, Wachregiment Feliks Dzerzhinsky, Ministry for State Security and Zivilverteidigung (Civil Defense) were also subjected to the basis of military law. Conscripts drafted into the Volkspolizei-Bereitschaften served for a period of 18 months of compulsory service serving longer as a reservist to the Nationale Volksarmee.

These reservists fell under the command of the Nationale Volksarmee Military District Command upon being called up for service. Provisions for incorporating reservists into the Volkspolizei after completion of military service was authorized as well.

Each alert unit was organized into seven companies as follows:


Headquarters and staff company with:


Of the 21 Volkspolizei-Bereitschaften units in East Germany, six were deployed in the immediate vicinity of East Berlin of these units were included the specialized counter-terrorism unit 9. Volkspolizei-Kompanie based in Potsdam-Eiche and a Helicopter aviation unit located in Diepensee at the Berlin-Schönefeld airport in East Berlin. These units were equipped with light and medium infantry weapons such as the MPi version of the AK-74 assault rifle, RPK light machine gun and RPG-7 and RPG-18 rocket propelled grenade launchers. They maintained mobility armed with varying armored vehicles such as the SK-1 wheeled armored personnel carriers, SK-2 water cannons in both armored and unarmored versions and buses.
Posted by Unknown at 1:39 PM