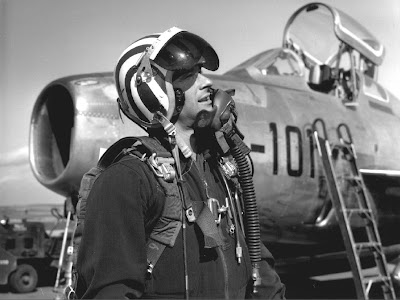 In the years before the construction of the Berlin Wall, there were frequent incidents of territorial violations on both sides of the Iron Curtain. A great number of these violations occurred in Germany, due to the close promixity of the German Democratic Republic to the Federal Republic of Germany. It was recorded that on average two NATO aircraft would stray across the border violating East German airspace each month. In contrast to this, Soviet military aircraft would stray across the border into West Germany at a much greater frequency than their NATO adversaries. In a four week period alone in late August and early September, there were 38 violations of West Germany's airspace by Soviet pilots. Some airspace violations were deliberate attempts to provoke the West into responding and testing their resolve to launch and intercept the intruders and yet others were accidental caused by the inherent difficulty of determining the border line of East and West from the air.

Due to the Potsdam Agreement and later the Four Powers Agreement, West German military elements were not allowed to enter West Berlin. Only military forces of the victorious former western allies were permitted to enter West Berlin. This actually applied to not only West German military forces but also West German civil airliners and aviation services as they would have to cross the territory of the German Democratic Republic. In the aviation realm, the only authorized entry corridors into West Berlin across East German territory were three air corridors. One of these corridors was to be flown from Bremen or Hamburg then to Tegel Airport in the French sector of West Berlin. This corridor was the Northern Corridor. The Central Corridor consisted of Hanover, Düsseldorf, Köln or Bonn before entering Gatow in the British sector of West Berlin. The final corridor or Southern Corridor could be flown from Frankfurt, Stuttgart, Munich or Nuremberg before flying into Tempelhof Airport in the American sector of West Berlin.

Cold War tensions greatly intensified with the Berlin Crisis of 1961 when Soviet Premier Nikita Khrushchev initiated a series of threats towards the Western Allies. His goal was to force the western Allies and their military forces out of Berlin and thus effectively end the Allied presence deep in the heart of Communist territory. On Saturday 12 August 1961, members of the East German Volkspolizei and soldiers of the Nationale Volksarmee began tearing up roads and emplacing barriers around West Berlin as they began construction of the Berlin Wall. During this period, military forces of the Soviet Union were present as they faced off against Allied military forces to prevent intervention in their activities. This action immediately caused a new wave of difficulties in relations between the Federal Republic of Germany and the German Democratic Republic. A month later with the world still holding its breath with the situation in Berlin, there would be yet another incident that could potentially set off a war in Germany. 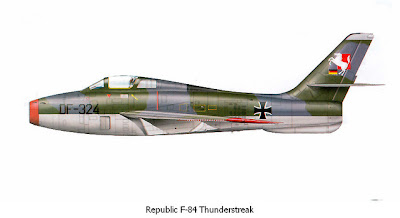 The date was 14 September 1961 a month after the construction of the Berlin Wall, and NATO military planners mobilized military forces of France, Belgium, Denmark, the Netherlands and West Germany for a military exercise it called Exercise Checkmate. The West German Luftwaffe's Jagdbombergeschwader 32 or '32nd Fighter Bomber Wing' stationed at Lechfeld Airbase near Augsburg, West Germany was to send fighter bombers on a triangular flight path from Würzburg to Laon, and Memmingen before returning to base. Two Republic F-84F Thunderstreak fighter bombers flown by Feldwebel Peter Pfefferkorn and Stabsunteroffizier Hans Eberl took off from Lechfeld and proceeded on the assigned flight course. Somewhere along this route, Pfefferkorn's magnetic compass malfunctioned, misreading his actual position by between 40 to 60 degrees. Additional problems were encountered by a stronger westerly wind than had been reported by weather reports. The pilots began so disoriented while navigating their flight course that the misidentified Liège, Belgium for Reims, France.

The pilots were soon tracked by Allied radar near the town of Warburg in southern Westphalia heading east towards the Inner German Border and the town of Königs Wusterhausen near Berlin. In the process of communicating with one another and trying to pinpoint their exact location, the disoriented pilots missed radio calls from Allied radar stations attempting to notify them of the impending violation of East German airspace. It wasn't until reaching a position north of Leipzig, that the pilots initiated a mayday call which was picked up by French controllers at the Tegel Airport in West Berlin. Immediately the controller authorized the Luftwaffe pilots permission to land their planes at the airports facilities. The planes had gone unnoticed by American controllers at Tempelhof Airport due to a focus on a Pan Am Airlines DC-6 operating in the Southern Air Corridor.

When American controllers picked up the pair of West German aircraft in East Germany, the controllers noted a large force of Soviet fighter aircraft pursuing them all but unsuccessfully. In risk of a potential shoot down and inciting an international incident, the American controller radioed to both pilots ordering them not to turn around and heading back into the intercepting Soviet force but to continue heading for West Berlin. The decision was made for the pilots to land at Tegel Airport in the French zone of West Berlin rather than Tempelhof in the American zone because Tegel had a longer runway than Tempelhof and was better suited for accommodating jet aircraft. Following the orders of the American controller at Tempelhof, the pilots continued on their course and were able to locate a cloud bank. Utilizing the heavy cloud cover, the aircraft evaded their pursuers and successfully landed at Tegel without further incident.

With both Luftwaffe F-84s secured upon landing at Tegel, the French authorities began the process of justifying their actions to the Soviets in East Berlin stating that technical difficulties required both aircraft to make an emergency landing at the airport. As a result, West German Minister of Defense Franz-Josef Strauß in accordance with West Germany's standing foreign policy of not acknowledging the German Democratic Republic, issued an apology to Soviet representatives in West Germany's capital of Bonn. The Soviet response was initially mulled before they sent a response protesting what it stated was West German provocation and threatened to shoot down any aircraft that violated East German airspace in any future incidents. 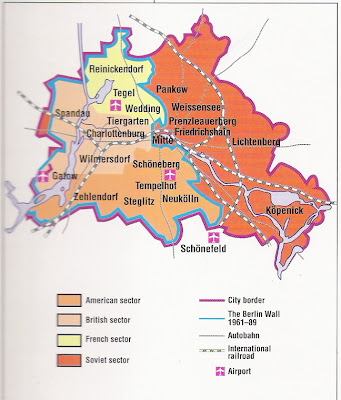 Immediately following the incident, Defense Minister Strauß and Luftwaffe Inspector General Josef Kammhuber had the commanding officer of Jagdgeschwader 32 transferred and they initiated a policy where any commander who's aircraft violated international borders would be immediately relieved of their commands and replaced. Both pilots that had partaken in the incident Feldwebel Peter Pfefferkorn and Stabsunteroffizier Hans Eberl were grounded and their flight status cancelled. Both pilots were then transferred to a Luftwaffe ground unit at Lechfeld.

As for the two Luftwaffe F-84s, upon their arrival at Tegel Airport they were placed in secured hangars out of view and access to the aircraft was severly restricted. Members of the media were forbidden to take pictures of the aircraft. Initially, it was believed that the two fighters were smuggled out of West Berlin having had their Luftwaffe schemes stripped from the fuselage of each aircraft and being repainted in United States Air Force livery before being flown from Tegel and returned to the Luftwaffe in West Germany. Another account stated that both aircraft had been disassembled by American crews and flown back to West Germany in American transports piece by piece. This theory was substantiated by the arrival of two United States Air Force Douglas C-124 Globemaster transports at Tegel Airport from Rhein Main airbase near Frankfurt am Main.

In reality, the French authorities in the French sector of West Berlin ordered that the two West German fighters remain hidden at Tegel and that they 'disappear'. Both aircraft were then buried on the grounds of Tegel Airport. In the years following the burial of the two fighter planes, the incident was generally forgotten and the Cold War carried on. Lost and for the most part forgotten it wasn't until years later that the aircraft were accidentally rediscovered during expansion and upgrade programs to Tegel Airport during the late 1970s.
Posted by Unknown at 1:07 PM