Defenders of the West: The Bundesgrenzschutz The Bundesgrenzschutz or Federal Border Guard was the first federal police organization in West Germany after the end of hostilities during the World War II permitted by the postwar Allied occupation authorities. The Bundesgrenzschutz's initial primary task was enforcing the security of the Inner German Border with the German Democratic Republic. In the years prior to 1955, Germany was barred from maintaining an armed force by Allied administrations, however concerns soon began to rise regarding the idea of creating an indigenous defense organization in the form of police and border security agencies on a federal level. The Western Allies soon permitted Germany to maintain a force for riot control and maintaining order during periods of civil unrest as well as conducting armed intervention in the event of war.

The origins of the Bundesgrenzschutz can be traced back to a statement made by the Allied Joint Chiefs of Staff on 2 May and 17 May 1950 in regards to a proposed rearmament of West Germany.

Further steps towards the construction of the security service was taken on 23 January 1951, when German Chancellor Konrad Adenauer approved the reinstatement of former members of the Wehrmacht to Commander of NATO forces General Dwight D. Eisenhower. The reason given behind the inclusion was that apart from a few exceptions there were no experienced officers available for Federal service. 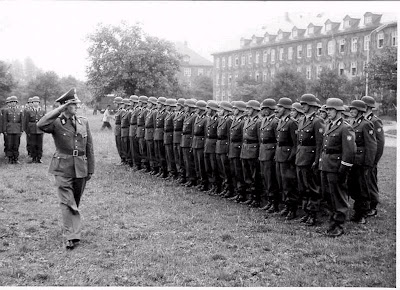 The Bundesgrenzschutz  was established as a specialized federal police force on 16 March 1951 with a force of 10,000 men under the command of the Ministry of the Interior. In these years there were frequent incidents along the borders with East Germany and Czechoslovakia, and the occupation authorities became convinced of the need for a competent border security service.  Initially only tasked with border security, during its existence its role would grow to include protective policing duties as well as criminal investigations. The first Border Detachment known as a Grenzschutzabeitlung was presented before the West German public on 28 May 1951 at Lübeck. A former Wehrmacht infantry General named Anton Grasser was instated as the Inspector General and Commander of the Southern Border Protection Command.

In the early years, the Bundesgrenzschutz was effectively a paramilitary police force organized along military lines with its members being organized into units equivalent to battalions, companies, and platoons. With the establishment of the Bundeswehr in 1955, the Bundesgrenzschutz continued to play a major role in defending West Germany during the Cold War. Its members were trained similar to light infantry and were accordingly armed with light and medium infantry weapons. In 1953, the authorized strength of the Bundesgrenzschutz was expanded from 10,000 men to a force of 20,000. Initial requirements stated that Bundespolizeibeamtengesetz or Federal Police Officers must be 27 years of age and only after six years of service were they allowed to be married. After protests were made against this policy, it was revised on 28 September 1953 and the restrictions were loosened and authorization to be married was granted. 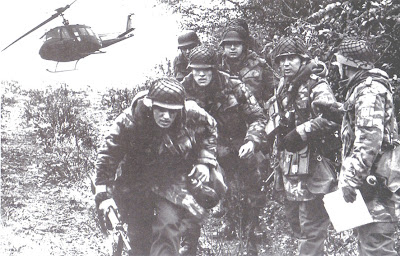 Officers joining the ranks of the Bundesgrenzschutz were required to take an oath similar to that of the Bundeswehr but varied to suit Federal employees. It stated:

The final statement "so help me God" was voluntary upon oath of service, able to be omitted or used in affirmation of the swearee's religious affiliation.

With the passage of Emergency Laws in 1968, the role of the Bundesgrenzschutz was adapted to retain its quasi-military role and could be deployed in the event of national emergency or civil unrest. Under the new legislation it now added large scale police operations such as containing unruly demonstrations to its list of duties. This was the first step taken towards cementing the BGS as a Federal police service. In 1976, the Bundesgrenzschutz training and personnel structure was changed from military style to a federal service equivalent however military style training and competence was still taught. However, Bundesgrenzschutz officials did not carry military ranks rather a system of titles mirroring those used by official state level police organizations. In 1972 the BGS became responsible for the security of the Federal Constitutional Court, the Bundespräsidenten or Federal President, the Bundeskanzler 'Federal Chancellor', the German Foreign Office and the Federal Ministry of the Interior.

After shortcomings in local police procedures and training were revealed by the unsuspected terrorist attack on Israeli athletes at the 1972 Summer Olympics on 5 September 1972, the West German government soon turned to the BGS to establish an elite counter-terrorist unit to cope with the ever growing dangers of international terrorism. The resulting organiztion would be established and commanded by a federal police officer named Ulrich Wegener. This task force would come to be known as Grenzschutzgruppe 9 or Special Group 9 commonly referred to as GSG-9. GSG-9 was formed specifically for dealing with terrorist incidents, especially hostage situations. The GSG-9 won world attention when it rescued eighty-six passengers on a Lufthansa flight,  when Flight 181 an airliner was was hijacked and taken to Mogadishu, Somalia, in 1977. 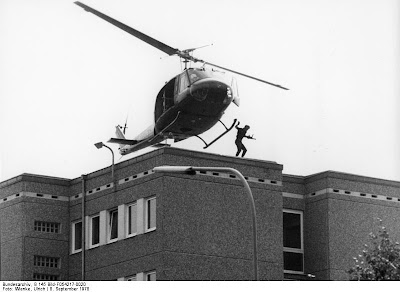