Atomic Age Artillery & The Tale of the Atomic Annie

The world was ushered into a new age when the United States brought the Second World War II to an abrupt end when it brought Japan to its knees utilizing a new weapon of warfare. When the two atom bombs were dropped on Hiroshima and Nagasaki, Japan in August of 1945 the world was brought into the nuclear age. The awesome destructuve power of these weapons could reduce one sprawling metropolises to desolate sprawls of twisted metal and ash and completely vaporizing the inhabitants. The United States maintained this nuclear edge until 29 August 1949 when the Soviet Union detonated its first atomic bomb designated RDS-1 and dubbed 'First Lightning'. The bomb was similar in appearance and construction to the American 'Fat Man' atomic bomb that was dropped over Nagasaki, Japan. It wouldn't be until 1951 however, that the Soviet Union would explode their first aerially delivered atomic bomb.

As the smoke of the Second World War began to dissipate in the late 1940s and a growing distrust of once former allies began to shape the political divisions of the World,  the Americans began developing its arsenal for preparations for a new potential war with the Soviet Union. With Soviet armies positioned across eastern Europe and across Asia, the clashes of democracy and communism were inevitable.

In 1949, the United States Army tasked the military research and manufacturing facility of  Picatinny Arsenal located in New Jersey to develop an artillery piece capable of firing nuclear projectiles. At the time maximum shell caliber available that Arsenal produced was the 240mm artillery shell. The new artillery piece was initially drawn up by an engineer named Robert Schwartz, with design influences coming from the Krupp K5 283mm railway guns employed by the Nazi Wehrmacht in World War II. Two of these massive weapons nicknamed 'Anzio Annie' and 'Anzio Express' by allied forces shelled the allied Anzio beach head during Operation Shingle, the amphibious landings in Italy. The guns were shipped to Aberdeen Proving Grounds in Maryland where they were tested and evaluated. It is likely that the name 'Atomic Annie' was derived from the German gun 'Anzio Annie'.

The gun design was approved by the Pentagon with the influence of the Chief of the Ballistics Section of the Army Ordnance Department's Research and Development Division, Mr. Samuel Feltman. It was during this time frame of the development of the new weapon was in effect that the Soviets caught the Americans by surprise and detonated RDS-1 in Semipalatinsk, the Kazakh Soviet Socialist Republic. From the approval of the design by the Pentagon, the weapon entered a three year development period and progressed well enough that a production model of the new weapon would be avaibable for the inaugural parade of the 34th President of the United States, Dwight D. Eisenhower. Eisenhower of course was a retired five star General in the United States Army who had been the Supreme Commander of Allied Forces in Europe and the first Supreme Commander of NATO Forces in Europe.

The cannon was designed to be transported by two specially designed tractors each one capable of independent steering similar to some types of fire engines. The tractors were capable of utilizing 375 horsepower and when operated in conjunction with one another could achieve a speed of 35 miles per hour. The gun was designed to be able to be unloaded and positioned in a span of 15 minutes as well as being reconfigured for transportation again in a matter of 15 minutes. 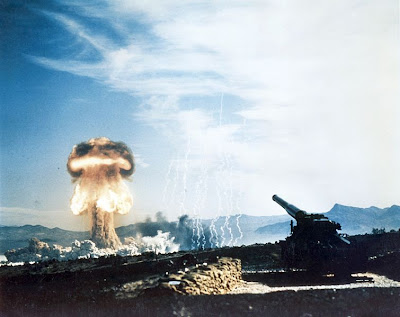 The first demonstration firing of the 'Atomic Annie' occurred on 25 May 1953 in a hydrographic basin or dry lake bed of the Nevada Desert known as Frenchman Flat at the Nevada Test Site. The demonstration was part of Operation Upshot-Knothole, a series of eleven nuclear test shots by varying yield nuclear artillery in conjunction with 21,000 soldiers conducting the field exercise Desert Rock V. The first firing of the Atomic Annie designated as 'Grable' possibly after actress and pin up model Betty Grable was attended by Chairman of the Joint Chiefs of Staff Admiral Arthur W. Radford and the Secretary of Defense Charles E. Wilson. The gun was fired successfully launching a 15 kiloton W9 nuclear artillery shell a range of 7 miles. The Grable shot exploded at a height of 500 feet above the ground and was to be the first and only nuclear projectile to be fired from a cannon by the United States.

The site of the detonation had been prepared for the demonstration, with trees being transplanted into the area, buildings and building serected, vehicles scattered and other equipment placed at varying distances from the initial point of impact to study the amount of damage inflicted. Prior to the Grable shot, seventeen days earlier a similar nuclear projectile known as Encore shot, a 27 kiloton device exploded in the Frenchman Flat area at a height of 2,800 feet. Although the yield of the Grable shot was half that of the Encore shot, Grable inflicted much more damage than Encore due to the abnormal destructive waveform emitted from the round that would come to be known as a 'Precursor'. A Precursor is a strong dynamic wind caused by an artillery projectile's oblique angle of approach and high horizontal speed . The nuclear explosion then essentially inherits the projectile's forward momentum which plows across the landscape and adds extensive drag damage to the already awesome destruction of the nuclear envelope. In one example, a jeep that had been untouched by the powerful Encore shot was nearly completely destroyed by the Grable shot and was thrown a distance of 500 feet from its initial point of origin.

With the success of the initial 'Atomic Annie' 280mm gun, the United States Army accepted delivery of 20 of the weapons manufactured at Watervliet Arsenal in New York and Watertown Arsenal in Massachusetts at a cost of $800,000 per gun. These guns were deployed to Army forces in Europe and South Korea. One of these units was the United States Army's 2nd Armored Division in Baumholder, West Germany. The weapon's ability to fire a conventional or nuclear shell a distance of nearly twenty miles made it a formidable indirect fire weapon. The weapons were often continuously relocated from position to position to avoid detection and targeting from enemy forces. Soon after their employment, the Atomic Annie was rendered obsolete.  The weapon's limited range, the size of the weapon including it's transportation equipment, the development of nuclear projectiles capable of being fired from standard field howitzers and the development of rocket and missile mounted nuclear weapons put the final nail in the coffin for the service life of the cannon designated M65 in United States Army service.

The weapon nonetheless remained a symbol of prestige to the United States Army and was not retired from service until 1963.