Who was Willi Sänger? 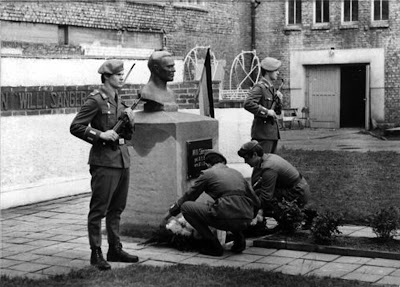 Not much is really known about the person known as Willi Sänger outside of the former areas that made up the German Democratic Republic. To most his name is only reminiscent of the paratrooper battalion of the East German army, the 40. Fallschirmjägerbatallion. When the Soviet Army took over administrative duties in the eastern sector of the country following the defeat of Nazi Germany, they immediately set out to establish a communist friendly environment in their newly occupied territory. One of the ways they set out to do this was to free imprisoned communists and communist sympathizers that had been imprisoned by the former regime. Many of the communist sympathizers that had been put to death during the 1930s and 1940s during the reign of the National Socialists were given somewhat of a 'martyrdom' status by the Soviet authorities. Using Germans Communists was particularly symbolic as it seen as a way to empower the German people to identify with the communist cause and find pride in their own people.

The man known as Willi Sänger was born in Berlin, Germany on 21 May 1894. He would begin his affiliation with the Communist movement when he joined the labor movement in the years before the First World War. He joined the Kommunistische Partei Deutschlands or Communist Party of Germany in 1919, where he would found the Division of the Workers Athletics and Sports Club. He would advocate the sports organization in Berlin during the final days of the Weimar Republic proclaiming the struggle of the community Red Sports unit. He was as a clerk by profession in 1933 when Nazi Party leader Adolf Hitler was appointed Chancellor of Germany. He would later work for the Soviet state travel agency 'Intourist'.  Intourist was established by Soviet leader Josef Stalin in 1929 and manned by agents of the NKVD secret police and later by members of the KGB intelligence agency.

Shortly after the Reichstag fire of 1933 with the Nazis instituting violent pogroms against other political parties and ideals, Sänger was instrumental in saving many communist books in a time when the Nazis were burning any books deemed un-German by the Hitler regime. In 1938, he joined the resistance movement alongside another German communist by the name of Robert Uhrig. While a member of the resistance he began illegally working as a functionary of the Communist Party and from his printing activities in which he printed anti-Nazi publications he was placed on the Nazi's Wanted List.

This group was eventually found out and destroyed by the Gestapo, the Nazis secret police service. Sanger escaped and joined another KPD resistance group named after Anton Saefkow whom was the imprisoned secretary of the Communist Party of Germany. As a member of this group known as the Saefkow-Jacob-Bästlein organization, Sänger would serve as a liaison officer and courier to other anti-Nazi resistance groups located in the Leipzig area. In 1944, he pulled off the daring feat of capturing the Gestapo's most wanted files and used the information contained in the files to contact and warn most of the people listed within allowing many to evade capture.

In July 1944 his luck had run out and he was denounced, his location revealed and he and his group were arrested by Gestapo agents. With strict orders from Berlin, not to give fair treatment to saboteurs or resistance fighters against the national socialist cause Sanger was given a mock trial and was sentenced to death by the Volksgerichtshof or 'People's Court'. The sentence was carried out and Sänger was executed by beheading at Berlin's Brandenburg-Görden prison on 27 November 1944. Fellow resistance leader and associate of Sänger, Robert Uhrig would suffer the same fame around this same time. After the defeat of Nazi Germany, the East German regime began bestowing units of its armed forces with the distinction of being named after pro-Communist fighters that had challenged the Nazis or had taken great strides in advancing the struggle of the people.

On 23 September 1969, the Nationale Volksarmee reformed it's existing parachute battalion and bestowed upon it the title of 'Willi Sänger' in honor of the hero of the communist struggle against Hitler's fascism. It was a fitting tribute naming a small unit which specialized in assymetrical warfare and uncoventional operations deep behind enemy lines after a resistance fighter.
Posted by Unknown at 7:37 PM