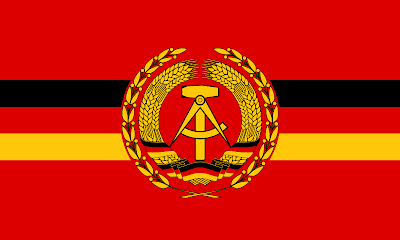 The Volksmarine of the German Democratic Republic although not as large as its West German naval counterpart or other Navy's was none the less a potent military branch with capabilities to harass NATO shipping and land forces. It maintained no submarines, which were barred from serving in the East German Navy by the Soviet authorities however it did operate several frigates as well as fleets of torpedo and fast attack boats. After the construction of the Berlin Wall on 13 August 1961, the Volksmarine found itself with a two fold mission, with forces dedicated to defending the nations coast and waterways, and forces dedicated to patroling East Germany's waterways to prevent defection into the West. Many of the combat vessels in Volksmarine service were built in East Germany, with other vessels as well as aircraft provided by the Soviet Union and the People's Republic of Poland. Ironically, in 1988 the Volksmarine had a brief hostile confrontation with the naval forces of Poland over a maritime border dispute.

The Structure of the the Volksmarine was established into three Flotillas and a single Coastal Border Brigade as such: