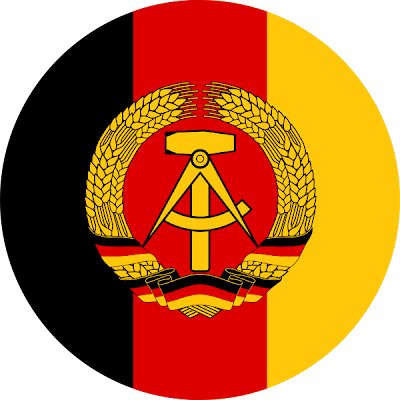 At the height of the Cold War, the East German Ground Forces maintained a personnel strength of 180,000 soldiers spread across ten combat ready divisions. Eight of those were motorized infantry regiments supported by two armored divisions. There were six primary combat divisions divided into two military districts reflecting their area of operations. Military District North was headquartered in Neubrandenburg, East Germany and was comprised of the following combat divisions:


The Military District South was headquartered in Leipzig and was comprised of the following combat ready divisions:

The northern military district would have most likely been the East German units that would cross the north German plains and face off against the British Army of the Rhine and NATO’s Northern Army Group (NAG) comprising of forces from West Germany, Belgium, the Netherlands, and the United States positioned across Lower Saxony, western Schleswig-Holstein and North Rhine Westphalia.

The North German Plain is where NATO commanders expected the main thrust of a Warsaw Pact invasion of Western Europe led by the Soviet Army's Third Shock Army, a force the size of four Corps with two independent regiments attached to it remaining positioned in East Germany since the Soviet victory at the end of the Second World War. The composition of the North German Plain proved excellent in theory for the deployment of armored forces and mechanized maneuver warfare.

The southern military district would have been the group facing off against U.S. military personnel in southern Germany poised to press into western Germany through the Fulda Gap or in a rather unlikely move in an armored thrust through the Danube in Austria.

The Fulda Gap was the secondary most likely invasion route but it's significance was not ignored by NATO's commanders. The composition of the Fulda Gap was a far less likely arena for mechanized warfare but it provided the Soviets and the East Germans with a direct route of attack for which to advance directly on the heart of American military forces in West Germany located at Frankfurt am Main. This would have proved a devastating blow for West Germany as Frankfurt am Main, was West Germany's financial center and by seizing this location, Soviet & Warsaw Pact forces could effectively stem the flow of American reinforcements which would arrive through large airfields such as Rhein-Main Airbase.

The Southern military district would have been supported by elements of the Soviet Army's 8th Guards Army of the Group of Soviet Forces in Germany and followed by a subordinate Soviet Army Group through the Fulda Gap into the West.

Behind these primary units were four units with a fifth ready for battle as well in the event of full mobilization for war. These were all motorized rifle regiments:


East German combats units were also supported by specialized units of the Kommando Landstreitkräfte such as the 40th Fallschirmjägerbataillon Willi Sänger, an airborne unit of battalion strength maintaining about 500 elite paratroopers trained in subversion, sabotage and other disruptive tactics. The 40th Fallschirmjägerbataillon Willi Sänger was the only airborne unit of the East German armed forces and was headquartered originally in Prora, Rügen Island and towards the latter stages of the Cold War near Potsdam.