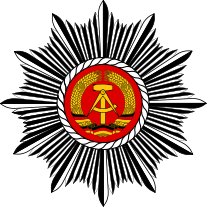 While any East German citizen could become a non-commissioned officer in the Volkspolizei, all members of the commissioned officer corps were required to be members of East Germany's ruling communist authority the Sozialistische Einheitspartei Deutschlands of 'Socialist Unity Party of Germany'  often abbreviated as SED.  The Volkspolizei, being the principal force responsible for law and order in the declared Socialist Workers Paradise, was expected to maintain and enfore the interests of the SED Communist Party, the ruling regime as well as maintaining public order.

The Volkspolizei was initially founded following the conclusion of World War II when the Soviet occupational authorities took the East German remnants of the Nazi Ordnungspolizei commonly referred to as the 'Orpo' and the Kriminalpolizei referred to as the Kripo and reorganized them into a centralized agency that would be politically reliable to the new communist authority. This was done when the SMAD or Sowjetische Militäradministration in Deutschland ' Soviet Military Administration in Germany established centralized police forces in the regions of eastern Germany it occupied following the cease of hostilities. By establishing these groups, the Soviets clearly were in violation of the agreements at the Yalta Conference and Potsdam Conference during the final years of the war. The SMAD officially approved the arming of these community-level police forces on 31 October 1945.

From 1952, these groups were reorganized along the existing Soviet police services with Section Representatives or ' Abschnittsbevollmächtigte' being appointed for communities and towns. Interested and concerned citizens could voluntary assist the Volkspolizei as a 'Helfer der Volkspolizei' or Helper of the People's Police. The Volkspolizei was placed under the control of East Germany's Ministry of the Interior with a network of district authorities and district offices reporting to the Chef der Deutschen Volkspolizei or 'Chief of the People's Police'. Rather than the civil service status that West German police enjoyed, each Volkspolizist had a personal contract with the East German government. The monthly salary was usually above the average income of a regular citizen of the German Democratic Republic. Officers in the Volkspolizei wore a system of rank insignias similar to those worn by the Nationale Volksarmee.

Underneath the centralized body of organization, the Volkspolizei was divided into five branches of police services, each with its own specialized areas of operation. These services were:


Following the conclusion of an investigation, the Volkspolizei usually transferred most of their reports to the notorious Ministry of State Security or 'Stasi'.  Given the high density of informants working for the Stasi in the German Demcratic Republic, especially in the armed forces, meant that every police action and investigation could be monitored. Besides the official Stasi liaison-officer in the Volkspolizei known as a 'Verbindungsoffizier', the Stasi had agents imbedded in  nearly every police unit. The overall commander was the First Deputy Minister of the Interior and Chief of Police known as the 'Erster Stellvertreter des Ministers und Chef der Deutschen Volkspolizei'. His section was subdivided into five departments respective to the five branches of service of the Volkspolizei organization:


The militarized organization of the Volkspolizei known as the Kasernierte Einheiten, was administered by the Deputy Minister of the Interior and Chief of the Administrative Center or Stellvertreter des Minister und Chef der Hauptinspektion. 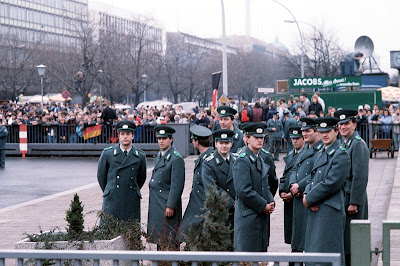 Recruitment into the ranks of the Volkspolizei required at least ten years of education, some established vocational training, military service, and a history of political loyalty to the SED communist party. Upon joining the force, a recruit would undertake a five month training and indoctrination course at the Police Academy or Volkspolizei-Schule. The course schedules contained a curriculum of political education and indoctrination, police law, criminal law and procedures, and military style physical fitness training. Upon completion of this course, the recruit would then complete a six month practical internship. From 1962, the Volkspolizei had its own university located in Berlin-Biesdorf from which around 3,500 police officers were trained up to end of the German Democratic Republic in 1989. There were also several other technical schools utilized by the Volkspolizei. The Kasernierten Einheiten, which were the barracked units had their own independent training facilities. Volkspolizei officers were initially trained alongside the Landstreitkräfte of the NVA. Then from 1963 to 1971 the officers were transitioned from the NVA schools to the Volkspolizei officers' school in Dresden-Wilder Mann. Limited time soldiers and lower grade leaders were trained in Leigau near Dresden up until the dissolution of the GDR.

The reasons given by many Volkspolizei officers for joining the force was a desire to work with people, along with idealism, family tradition, belief in the communist system and the wish to serve the German Democratic Republic.

The official oath that all Volkspolizei officers swore was:

Sollte ich dennoch diesen meinen feierlichen Eid brechen, so möge mich die Strafe der Gesetze unserer Republik treffen.
English:
I swear, to be loyal to my socialist fatherland, the German Democratic Republic and its government at all times, to keep official and state secrets, and to strictly obey laws and instructions.

I will unswervingly strive to fulfill my official duties conscientiously, honestly, courageously, vigilantly and with discipline.

I swear,
that I will, without reservation, under risk of my life protect the socialist social, state and legal order, the socialist property, the personality, the rights and the personal property of the citizens against felonious attacks.

If I nevertheless break this, my solemn oath, I shall be confronted with the punishment of the laws of our republic.

The Volkspolizei maintained a force of approximately 80,000 full time police officers along with nearly 177,500 volunteers. Each Volkspolizei precinct throughout the country maintained a Hausbücher which essentially contained citizens personal identification numbers. This database allowed the Volkspolizei and the Ministry of State Security's agents to gain access to all the information they required about every citizen in East Germany.

With the accession of the German Democratic Republic to the Federal Republic on 3 October 1990, authority over the law enforcement agencies went to the newly created federal jurisdiction. About 40 percent of the Volkspolizei's employees had to leave the service. 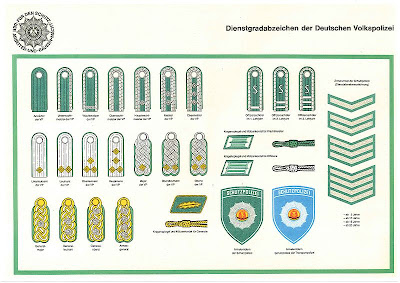