Conflict between Comrades: Tension along the Oder-Neisse Line 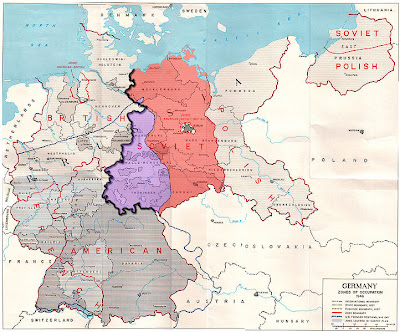 Although the military forces of the German Democratic Republic were never deployed outside of East Germany's borders, they maintained a high state of readiness prepared to engage in acts of warfare against the western aggressors at a moments notice. In the event of an attack from NATO or on the orders of Moscow, the Nationale Volksarmee would be the tip of the spear being the vanguard force to engage the enemy. In the event of war, the NVA would essentially be absorbed into Soviet command structures operating in support of friendly Warsaw Pact military units. The Soviets under the banner of promoting socialism and unity amongst the allied nations of the Warsaw Pact held vast military exercises influencing what was known amongst the East Germans as 'waffenbruderschaft' or armed brotherhood. After the signing of the Warsaw Treaty Organization of Friendship, Cooperation, and Mutual Assistance by eight communist nations in eastern Europe on 14 May 1955 as a direct response to the formation of NATO , the Warsaw Pact went into effect promising mutual defensive assistance among the signing nations. The only problem was that not everything was as it seemed amongst two 'allies' the German Democratic Republic and the People's Republic of Poland.

The cause for the friction between the two nations was a disputed border line between East Germany and Poland drawn in the aftermath of the Second World War known as the Oder-Neisse line. The line was comprised primarily of the Oder and Lusatian Neisse Rivers which flow into the Baltic Sea to the north of both nations. The Oder-Neisse line was determined during the final months of the Second World War and it was designated that all territory east of the line which Germany has historically held would be turned over to Poland. Under this plan, much of the territory that had comprised the former Weimar Republic and traditionally East Prussia were to be divided up with the majority going to Poland and northern East Prussia was to be turned over to the Soviet Union. Before the Second World War, the border was recognized partially along the historical borders of the Holy Roman Empire and Greater Poland with appropriate adjustments made to accommodate ethnic compositions beyond the traditional provincial borders.

By the latter months of the Second World War, thought had already been taken into how not only post-war Germany would be divided up, but also how it's borders were to be drawn as well as those for the rest of eastern Europe. Originally Germany was to retain the town of Stettin on the Baltic Sea, while Poland was to annex the territories of East Prussia and Königsberg. The idea behind the East Prussia absorbing was that East Prussia's positioning effectively undermined the territorial and defensive integrity of Poland. The Polish government also wanted the transfer of the Silesian region of Oppeln, along with the Pomeranian regions which included Danzig, Bütow and Lauenburg. Finally to complete their claims, Poland demanded a straightening of the border in the territory of Western Pomerania. As Soviet armies swarmed across eastern Europe headed west towards Germany, Soviet Premier Josef Stalin decided that the USSR would claim the region of Königsberg which would be used as a warm water port for use by the Soviet Navy. In exchange for Königsberg, the Soviets argued that Poland should receive the town of Stettin. The Poles insisted on retaining the city of Lwów but Stalin rejected this idea, offering that all of Lower Silesia along with the city of Breslau be given to Poland.

With an undetermined border being disputed amongst differing parties, the Western Allies generally accepted that the Oder River would be Poland's western border, but it remained undetermined if the border should be based upon the eastern or western Neisse River and whether or not Stettin which traditionally served as a port to Berlin would remain German or Polish. The Western Allies pushed for the border line to be along the eastern Neisse River at Breslau however, Stalin rejected this proposal. The final decision on the border line came at the Potsdam Conference in 1945 when it was decided that Stettin would be renamed Szczecin and turned over to the Poles and the boundary would be drawn between the western Neisse River and the Kwisa River. With the finalized Potsdam Agreement of 2 August 1945, it was decided that all German territories east of the Oder-Neisse line would be turned over to Poland and that all Germans inhabiting land in the new and old Polish territories would be expelled from the region. The new acquisitions to Poland's territory was known as the 'recovered territories' and the border concession was agreed to primarily because it was the shortest border between Germany and Poland at only 293 miles in length stretching from the estuaries of the Baltic Sea to the northernmost point of Czechoslovakia.

When the Sozialistische Einheitspartei Deutschlands 'Socialist Unity Party of Germany' was founded on 21 April 1946 by the merger of two former communist parties in the section of eastern Germany under Soviet administration, the SED initially refused to accept the Oder-Neisse line as the border area. With Soviet troops occupying its territory and with heavy pressure coming from Moscow, the SED relented and the term Friedensgrenze or 'Border of Peace' was developed to reference the area. On 6 July 1950, the German Democratic Republic now its own state, had signed an agreement known as the Treaty of Zgorzelec with the People's Republic of Poland which recognized the Oder-Neisse line as the official boundary. With preliminary offers of German reunification eing formulated, Josef Stalin propsed that the recognition of the Oder Neisse line be but one of many conditions which would be grounds for reunifying the divided nations. West Germany's Chancellor Konrad Adenauer rejected the offer under West Germany's policy of not recognizing the sovereignity of the German Democratic Republic or the communist government of the People's Republic of Poland. The border line was seen by many in West Germany as unacceptable as West Germany had received some 12 million displaced refugees from their expulsions from Poland's annexation of former German territories. 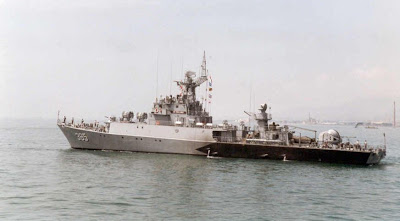 With the land border between Poland and East Germany effectively settled by the Treaty of Zgorzelec, the maritime borders remained disputed. The port city of Szczecin became highly contested with the SED in East Berlin declaring East Germany's territorial waters extended twelve miles out into the Baltic Sea rather than only three miles into the Baltic Sea. By 1985, it was rumored that naval forces of East Germany's navy, the Volksmarine and Poland's navy, the Marynarka Wojenna clashed several times over the rights of their respective nation's fishing boats, yachts and freighters crossing the Pomeranian Bay to reach Szczecin's ports. It was said that on several occasions gunfire was even exchanged between forces of the two navies. Leaders of the People's Republic of Poland claimed the Szczecin issue was an economic matter involving rights to use the Bay of Pomerania which the East German's were undermining at a time when the Poles were reinventing the harbors of Szczecin into a free trade zone. East Germany's claims to the Bay of Pomerania and access to Szczecin's ports were largely seen as an extension of the rift between East and West Germany.

East Berlin asserted that the presence of the Volksmarine was to soley protect its territorial integrity. Naval forces of the Volksmarine frequently detained fishing boats that it felt had violated East Germany's waters and impounded them. On many occasions the Marynarka Wojenna would hasten to the scene in an attempt to deter the incident at hand. Official recognition of the naval clashes was never publicly announced however on one occasion it was documented that in February of 1984 a freighter from Turkey had been stopped by East German warships. The ship had mistakenly strayed from its designated sea lanes and in response to the East German seizure of the vessel, the People's Republic of Poland deployed its own warships confirmed to be armed with live ammunition and rockets to retrieve the freighter from East German custody. It would not be until 1988, that the maritime border issue would be resolved when it was determined that two thirds of the disputed maritime border area where to go to the German Democratic Republic.

It would not be until shortly before reunification in 1989 that a treaty would be formally implemented to acknowledge the new maritime border between the two nations. It would be but one of several fractures in the facade of socialist unity during the latter years of the Cold War as reformist governments set to implement new policies and work in their own best interests.