Tragedy at Heilbronn: Death in the name of Democracy 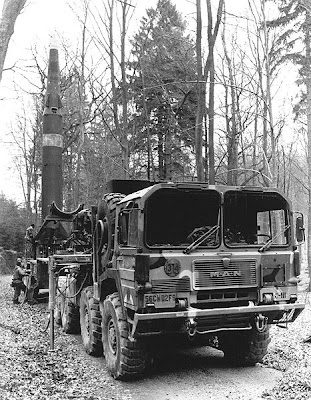 The 56th Field Artillery Command was the only United States Army unit in Germany equipped with the nuclear capable MGM-31 Pershing medium range ballistic missile. At the height of the Cold War, the 'super brigade' as it soon became known was ready to deploy at a moments notice and fire its nuclear missiles at targets in East German and Warsaw Pact territory. Because of its unique status, the 56th was organized to always report to the highest authority in command of forces in Europe. During peacetime, the unit would report directly to United States Army Europe and in the event of war, the unit would report to Allied Air Forces, Central Europe a NATO command. The unit was assigned to Hardt Kaserne and Bismarck Kaserne in Schwabisch Gmünd with additional subordinate units located in Neu Ulm and Neckarsulm, West Germany. The unit was designated a Quick Reaction Alert (QRA) force in 1965 where it would be required to maintain the heighest level of combat readiness to counter aggressive moves from the Soviet Union or its Warsaw Pact allies. The unit was to respond within seconds of receiving verified orders, with the entire command to be fully active within a sphere of 2 hours of any alert activation. With this heightened status, the United States Army reorganized the unit structure to accommodate 36 launchers per battalion, a sharp increase from the four launchers per battalion initially authorized.

The unit received the first of its Pershing II missiles in 1983, with improved guidance systems being a key upgrade over the earlier Pershing IA variants already deployed in Germany. As a response to the deployment of the American Pershing in Europe, the Soviet Union developed and deployed the RSD-10 Pioneer Medium Range Ballistic Missile which would be designated as 'SS-20 Saber' by NATO. The Pershing II was kept as a secret by the Americans and in an attempt to counter the system, the Soviets poured vast amounts of money and resources into research and development to counter the system and regain dominance in the region. Unfortunately, by the time of the fielding of the SS-20 system, it SS-20 was already obsolete by western standards. Three firing battalions were fielded in 1985, and poised a threat that the Soviets were unable or unwilling to counter.

Tragedy would strike the unit on Friday 11 January 1985, when soldiers of Charlie Battery, 3rd Battalion, 84th Field Artillery were conducting a standard training exercise at Camp Redleg near Heilbronn, West Germany. Camp Redleg was located 175 miles from the units home station of Schwabisch Gmünd where the accident occured. The accident occurred when a Pershing II missile that had recently arrived in West Germany from the United States caught fire. During a routine training exercise for the assembly of the missile system, the kevlar rocket bottle accumulated a triboelectric charge in the cold dry environment of southern West Germany. As the rocket engine was removed from the container, the electrical charge caused a hot spot that ignited the rocket's solid fuel propellant.  The removal of the rocket engine was supervised by appropriately qualified artillery officers and technicians and all procedures were being followed at the time of the accident.

The nuclear warheads that equipped the missiles were stored separate from the missiles themselves when the fire occurred. Three U.S. Servicemembers were killed in the accident and seven more injured in the fire. As a response to the accident at Camp Redleg, new moratoriums were enforced regarding the movement of missile systems and revised procedures were developed for grounding and handling the missiles and their components. The 11 January 1985 accident would be the most serious involving American ballistic missiles in West Germany.

The three servicemembers killed in the accident were:

A memorial plaque was placed near the location where the accident took place commemorating the accident and listing the names of the three soldiers killed in the missile accident. An inscription on the plaque reads:

"Lest we forget, who made the ultimate sacrifice for their country and peace and the soldiers of C Battery, 3rd Battalion, 84th Field Artillery (Pershing) injured in the missile fire at Camp Redleg, Heilbronn, West Germany" 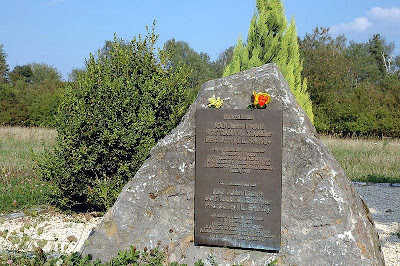