Structure of the School of Socialism: Ranks of the Nationale Volksarmee

The armed forces of the Nationale Volksarmee like its West German Bundeswehr counterpart went through several variations of rank insignia throughout its existence from 1956 through to the collapse of the German Democratic Republic in 1990. For the most part, the East German military utilized a system of shoulderboards to classify its soldiers. Shoulderboards were worn on service, semi dress and parade uniforms. Up until 1986 with the introduction of a series of oval and rectangular rank patches, subdued equivalents of the rank shoulderboards were worn on field uniforms. In an effort to make the recognition of rank easier, the military command of the NVA began phasing out the subdued shoulderboards and authorized the wear of the rank patch on field uniforms. The oval shaped embroidered rank insignia was initially worn on the front of the rain pattern baseball cap known as the 'Baseballmütze'. The patch was worn underneath the East German coat of arms roundel and was worn primarily by soldiers of the Nationale Volksarmee sent outside the German Democratic Republic on matters concerning military inspections and field exercises. Personnel assigned to the Luftstreitkräfte der NVA however, did not wear the oval shaped patch. The oval rank patches were an embroidered oval design consisting of a grey-green gabardine material, surrounded by a green border. Each patch measured roughly 1.5 inches tall by 2 inches wide. 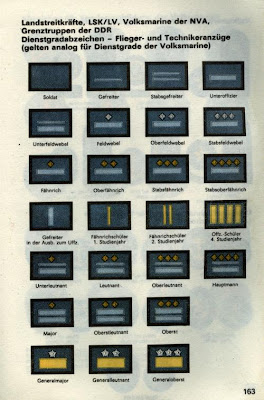 The rectangular rank patch was introduced in 1986, as a replacement for the subdued shoulderboards worn on the field uniform. The introduction of new rank insignia was a part of a greater motion towards reforms involving military uniforms regulations initiated the same year. The first units to receive the new insignia were initially flight and technical support personnel but this was soon expanded to all personnel serving in the East German armed forces. Shortly after the fielding of the new insignia, camouflaged field uniforms were manufactured without provisions for the wear of the earlier style subdued shoulderboards. East German regulations required the rank patch to be sewn on by flight and technical support personnel. On flight uniforms it was to be sewn on the front of the flight suit 5cm above the end of the slanted side pocket. On technicians jackets it was to sewn 1cm over the pocket flap of the top left sleeve and on their coveralls it was to be sewn 2cm below the top edge of the bib of the uniform coveralls. By regulation it was to be sewn on however, in actuality East German soldiers secured the patches by using the strap above the left sleeve pocket on their field uniforms to secure the patch to the uniform. The rectangular rank patches were on an embroidered design on a field grey-green gabardine base and measured roughly 3.5 inches tall by 2.37 inches.

East German ranks were designed along the lines of all Warsaw Pact rank organization which followed along the lines of the existing Soviet military rank system. Shoulderboards varied by branch and by military occupation. Shoulderboards worn on service, semi-dress and parade uniforms were often bordered using the waffenfarbe coloring of the specialty within the service. General officers wore a five pointed star on their shoulderboards against a gold and silver braid over a colored base varying by branch of service and all other officers beneath the rank of General wore a four pointed star on their shoulderboards. 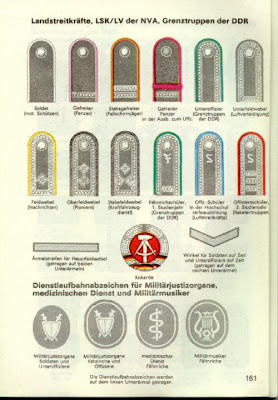 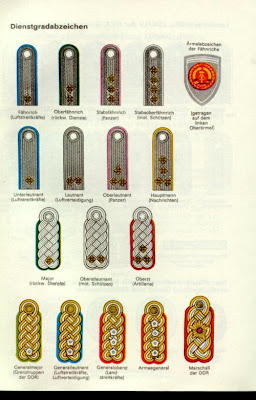 Service in the Nationale Volksarmee was divided into three categories: conscript service, term service or career service. Conscripts were persons who were fulfilling their military service requirement and served for a mandatory period of 18 months. Soldiers fulfilling term service known in the NVA as 'Soldat und Unteroffizier auf Zeit' were enlisted and non-commissioned officers that served a commitment for three years but could be authorized to serve up to ten years in the armed forces. Term enlisted personnel were authorized to attend courses to become non-commissioned officers which was an option not extended to conscript personnel. Term enlisted could obtain the rank of Sergeant and Term Officers could obtain the rank of Captain. Career soldiers known as 'Berufsunteroffizier' often fulfilling non-commissioned officer positions could serve a minimum of ten years or up until the authorized retirement age. Soldiers in the grade of Warrant Officer served for a minimum of fifteen years and Career Officers served for a minimum of twenty-five years in the NVA.

The East German military pay scale varied accordingly by rank and grade with special bonuses being authorized for extraordinary performance or by certain specialties such as flight pay or border security duties. Military pay was increased by a rate of 25% during the military reforms of 1982, and pay in the NVA was exempted from income taxes and social security deductions. For career soldiers, completion of military service guaranteed the person a position in the civilian market with pay equivalent to their income obtained in the military.

Training in the Nationale Volksarmee was centered around two areas of importance which were political reliability in regards to loyalty to Communism and technical competence. The majority of training focused on emphasizing technical skills to operate, maintain and repair military equipment. All officers particularly in the Luftstreitkräfte der NVA, Luftverteidigung and Volksmarine were required to become proficient in the Russian Cyrillic language. The training was designed to improve the performance of individuals as well as enhance military unit capabilities and for teaching discipline and promoting citizenship to the German Democratic Republic. Referred to often as the 'School of Socialism' the Nationale Volksarmee conducted basic training varying by the unit to which the soldier was assigned to serve. Certain units such as the Grenztruppen der DDR and certain Volksmarine personnel were sent to specialized training units. 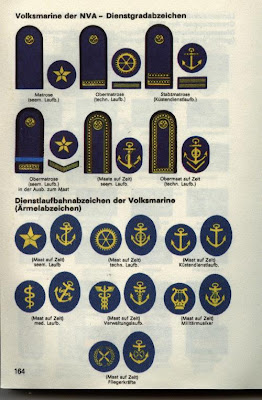 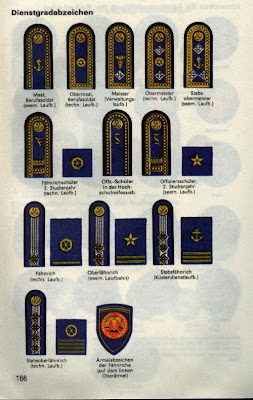 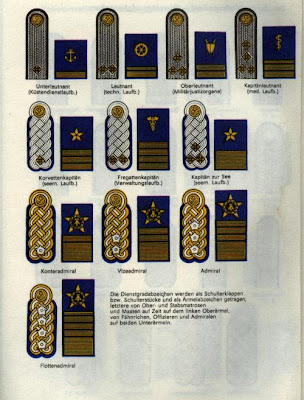 The Nationale Volksarmee maintained an extensive network of schools and academies focused on improving the technical expertise of non-commissioned officers and commissioned officers alike. One of the main areas of focus with increasing responsibility was increased focus on political reliability and the teachings of Karl Marx. Officers obtaining senior positions in the East German rank structure were often sent to educational institutions in the Soviet Union for enhanced training.

Ranks of the Landstreitkräfte, Luftstreitkräfte der NVA, Luftverteidigung and Grenztruppen der DDR were generally the same with different coloring varying by the branch of service. Different devices were also worn on certain insignia to signify officer candidates and cadets. Embroidered chevrons were worn on the service tunic sleeve to differentiate between term and career soldiers and a specialized patch was worn by Warrant Officers.

Ranks of the Volksmarine were similar to those worn by the other branches but were supplemented by a series of stripes on the sleeve.