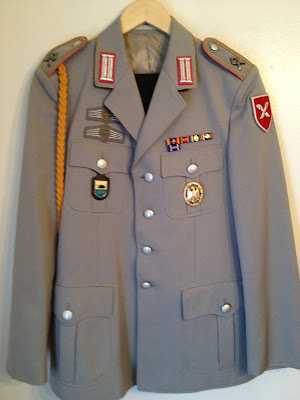 The uniform shown here is of a Hauptfeldwebel or Master Sergeant of the Panzertruppen or Armored Corps. The Senior Non-Commissioned Officer was also holding the appointment of Kompanienfeldwebel or Company Sergeant which would be known in the United States Army as a Company First Sergeant. Typical of post 1970 issued Heer tunics, the fabric is of a lighter gray colored material than earlier model Army uniforms. 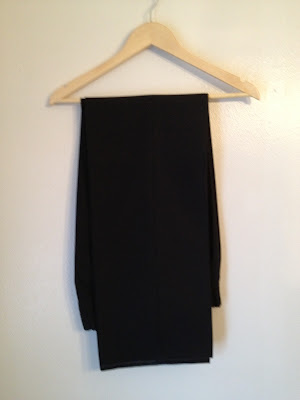 It retains the black trousers worn by Army personnel. 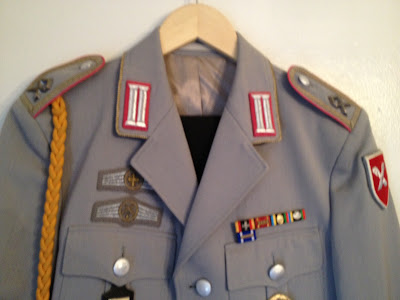 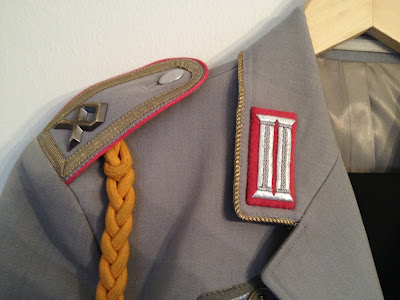 This uniform bears the waffenfarbe colored piping of the Armored Corps. The shoulderboards display the rank of Hauptfeldwebel or Master Sergeant in officer style bullion designed insignia typical of Senior Non Commissioned Officers. 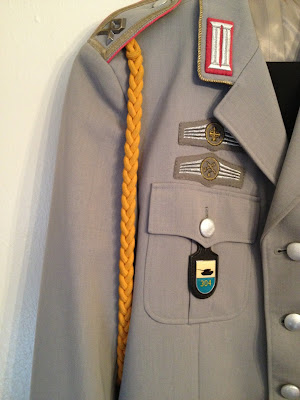 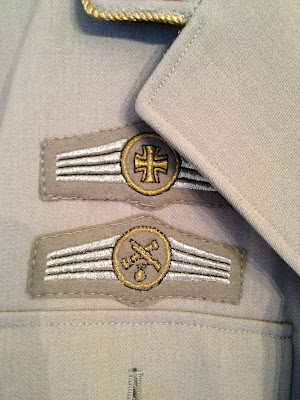 The right side of the uniform displays the gold Kompaniefeldwebel-Schnur or Company Sergeant's Cord, a gold braided decorative cord representing the wearer's position as the Company First Sergeant. Also displayed are the embroidered qualification badges known as  Tätigkeitsabzeichen Streitkräfte (Military Forces Qualification Badges) the first one being the Kompaniefeldwebel Dienststellung (Company Sergeant Service Position) consisting of the Heer Iron Cross insignia and the second one underneath being the Rohrwaffenpersonal (Tubed Weapons Personnel Specialist) displaying a crossed anti-armor weapon and rifle over a colonial style burning grenade. 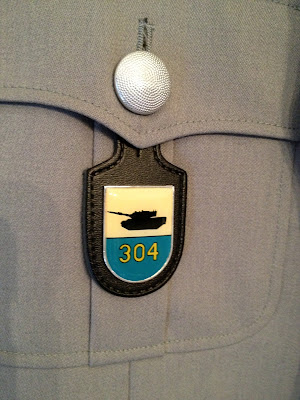 On the pocket is the brüstenhanger (breast hanger) pocket badge noting the current duty assignment being the Panzerbataillon 304, Panzerbrigade 8 (304th Armored Battalion, 8th Armored Brigade) assigned to Munster in Lower Saxony, northern West Germany. The unit was deactivated shortly after the end of the Cold War in 1993. 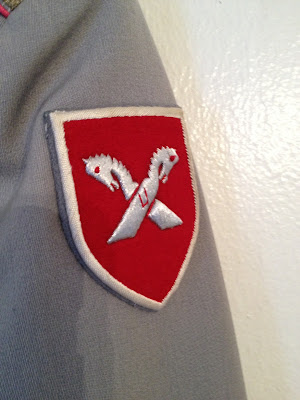 The left shoulder patch of two horses crossed against a red background is the unit patch of the Panzerbrigade 8. 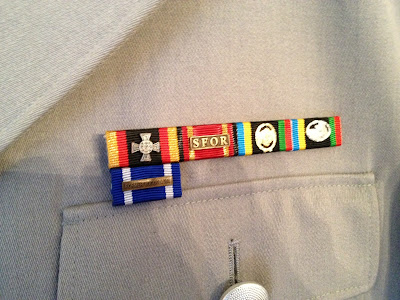 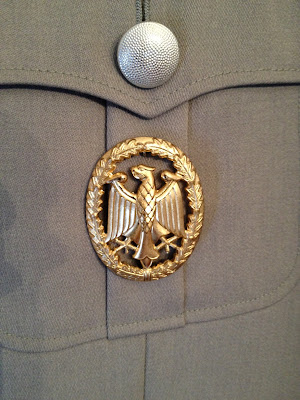 The soldier was also presented the Abzeichen für Leistungen im Truppendienst in Gold (Armed Forces Badge for Military Proficiency in Gold) a round on its center and displays the German eagle surrounded by a wreath of oak leaves.as worn on the left breast pocket of the tunic. 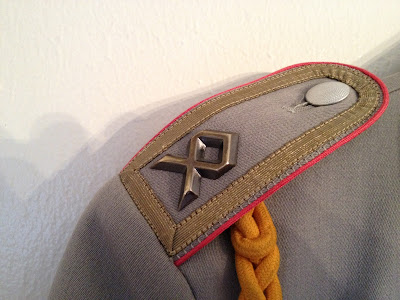 Notice the "Alt Gold" piping around the collar, this piping was applied to all Senior NCO's tunics from Feldwebel to Oberstabsfeldwebel adorning the shoulder boards in conjunction with the standard pink piping of the Panzertruppen.

The Kompanienfeldwebel being a Senior NCO position of appointment rather than a rank grade has many nicknames, including Der Spieß or "The Spear" which is reminiscent of First Sergeant nicknames in the United States Army such as 'Top' in most units or 'Smoke' in Artillery units. Another common nickname for the Kompanienfeldwebel is Mutter der Kompanie or "Company Mother" amongst other names due to their position as leaders and for their carrying out of administrative duties. 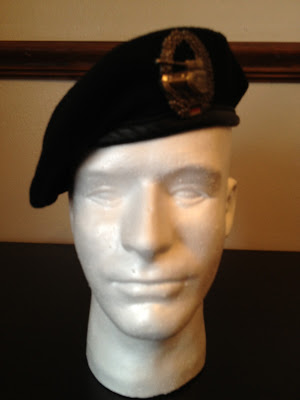 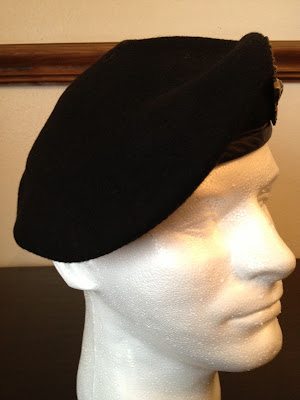 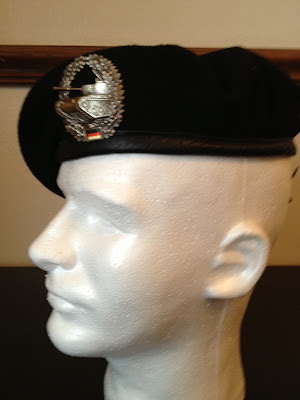 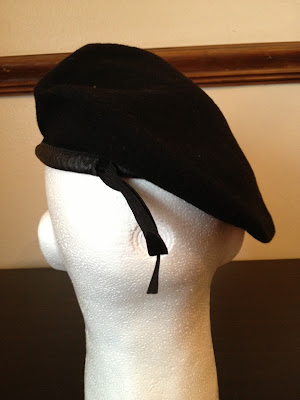 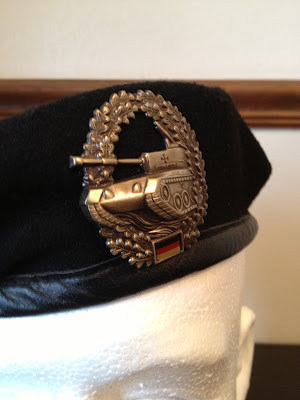 After the Bundeswehr began its transition from the wear of the peaked caps to the berets in the late 1970s, the Armored Corps were designated to wear a black beret with the insignia of the Armored Troops which depicts a stylized battle tank in a wreath of oak leaves, which get its origins from Panzerkampfabzeichen or Armored Warfare Badge of the former German Wehrmacht. 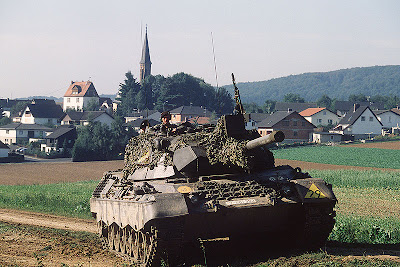 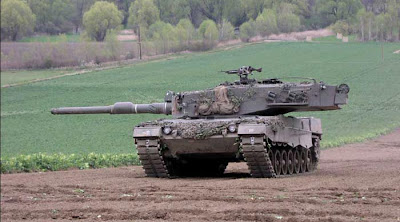 The Panzertruppe is the armored branch of the West German Heer. As the armored corps of the Army it is their duty to close with the enemy and engage the enemy armored formations across open terrain. Initially upon establishment of the Bundeswehr the Army decided to maintain six armored divisions consisting of 16 armored brigades each with two tank battalions and an armored infantry company. It also would maintain one Mountain Division with four tank battalions and two tank destroyer companies. Two independent armored regiments and 51 tank battalions.

Each company initially had three platoons of five tanks plus the armor of the company commander and the transfer vehicles. After the revisions known as Army Structure II the number of tanks in each was reduced. Battalion staff maintained three other vehicles at the headquarters company for use by the commander and executive officer. A Battalion was essentially a force of 54 battle tanks. The home of the Armored Troops was located in Munster, West Rhine-Westphalia and the Panzertruppe was initially equipped with American made M47 and M48 Patton main battle tanks. These were replaced in 1965 by the Leopard I main battle tank, the first post war tank of European design introduced into German military service since the Second World War. The Bundeswehr would employ some 2,800 armored vehicles fighting vehicles.

With lessons learned during the Second World War, and the emphasis on armored warfare against the numerically superior Warsaw Pact armored formations, the Heer order some 4,600 main battle tanks. By the 1980s, the Heer reorganized the armored formation structure to a combined arms force of armor and armored infantry in composition. The Heer went through an upgrade and improvement campaign for its armored forces in the mid 1980s, with the procurement of the more advanced Leopard II main battle tank to replace the earlier Leopard I. Most Leopard I's had been replaced by 1987. 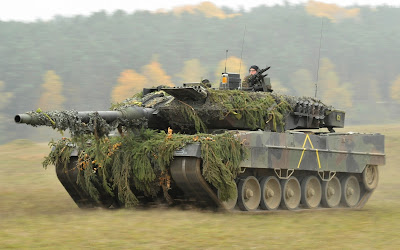 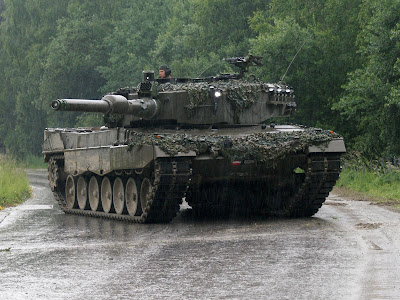