A Brilliant Deception: The RAF and the Case of the Yak-28 in West Berlin

By 1966, the Cold War was in full swing and tensions between East and West were rising. Only a couple years earlier, the world held its breath at the brink of nuclear war with the Cuban Missile Crisis and the United States had begun ramping up its involvement in Vietnam. The Berlin Wall was now a standing symbol of the Cold War as the government of the German Democratic Republic enforced its stance to prevent its people’s defection into the West.

On 6 April 1966 a pair of Soviet Air Force Yakovlev Yak-28P Firebar fighters took off from Finow Flugplatz located near Eberswalde, East Germany on a mission to another yet undisclosed airbase in East Germany. Part of the flight plan for the pair of fighter aircraft took them through the vicinity of Berlin. By this time East and West Berlin had been physically separated for over five years by the Berlin Wall. At around 3:30pm one of the pilots radioed air traffic controllers with an emergency situation declaring that one of the Yak’s two Tumansky R-11 turbojet engines had failed and that the aircraft was becoming unstable and difficult to control. Soviet military controllers ordered the stricken aircraft to make an emergency landing at Schönefeld Airport in East Berlin. Unable to keep control of the aircraft, the pilot of the wounded Yak-28 flew across the border into West Berlin maintaining control of the aircraft long enough to avoid a series of apartment blocks before crashing into Lake Stößensee in the British controlled sector of West Berlin. In the struggle to maintain control of the aircraft to avoid collateral damage both crewmembers; the pilot and navigator failed to eject and were killed in the crash.

American and British military intelligence services were monitoring the Soviet distress call from a monitoring facility at the Teufelsberg as well as at nearby RAF Gatow at the time of the crash and members of the British BRIXMIX in West Berlin were dispatched to cordon off the crash site. The crash site was secured quickly in an effort to prevent the Soviets from an unauthorized incursion into West Berlin to recover the downed aircraft. As members of the British Royal Military Police secured the perimeter a bus carrying Soviet soldiers intended for pulling guard duty at the Soviet War Memoral at the Tiergarten arrived on scene. Tensions began to escalate as Soviet soldiers attempted to force their way through the cordon to the crash site.

One of the first on scene was a member of the British Royal Air Force Squadron Leader Maurice Taylor who rowed to the crash site and began taking photographs of the area snapping several shots of the wreckage of the Soviet aircraft. British interpreters did the best they could to stall Soviet forces under the command of General Vladimir Bulanov so they could recover the aircraft and analyze it for characteristics that would be of interest to the West. A barge and crane were floated into position over the crash site and British officials issued a promise to the Soviet Mission in Berlin that the bodies of the crewmen and the wreckage of the aircraft would be returned to the Soviet Union. Secretly British technical experts were flown into West Berlin from Farnborough’s Royal Aircraft Establishment where they would make several remarkable discoveries about the Soviet aircraft. 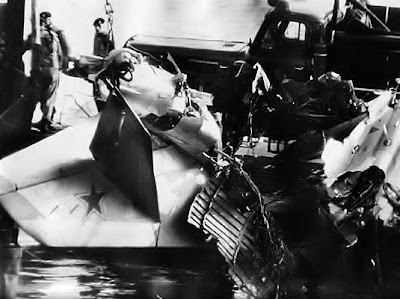 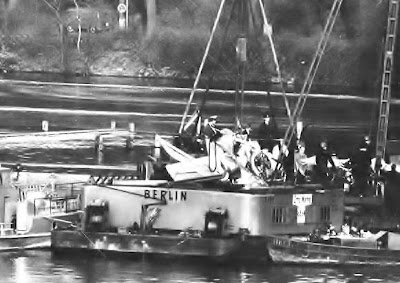 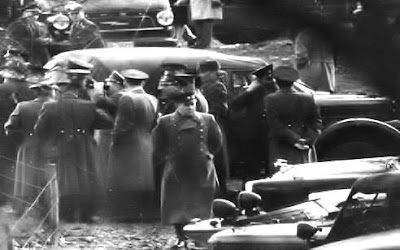 The Yak-28 carried a sophisticated radar system known as the Skipspin which gave the Soviet fighter the capability to look up and down as well as ahead when doing scans. This radar system was of great interest to both the Americans and British militaries. British divers successfully recovered the bodies of the Captain Boris Yapustin and Lieutenant Yuri Yanov the following day; however the British stalled in returning the bodies using the extra time to remove the radar system and the engines of the Yak-28 while convincing the Soviets that work was still being done to recover both pilots’ remains. The Soviet commander under suspicion that the British were up to something accused the British of having soldiers prepared to shoot any Soviet soldier that penetrated the cordon over the lake. In an attempt to substantiate his claim, the General ordered a platoon of Soviet soldiers to march towards the Lake. Major Johnathan Backhouse, a British interpreter was present when a standoff ensued and soldiers on both sides switched their weapons from safe to arm. Backhouse quickly asked the Soviet troops if they had received clearance to enter the area. Upon responding that they had not been authorized to enter General Bulanov ordered the troops to fall back away from the lake.

On the third day, the bodies of the Soviet crewmen were officially reported as having been recovered and the return of the bodies to Soviet forces was scheduled for the approaching evening.  Secretly the Firebar’s secret Skipscan radar was already on its way back to the United Kingdom for analysis but work was still being carried out to remove the radar’s dish from the nose of the aircraft which was lodged in the mud of the bottom of the Lake. The British were carrying out a brilliant deception of the Soviets as they allowed a boat to arrive and offload several passengers while secretly, the Yak’s engines were secured by line to the bottom of the boat where they were dragged nearly a mile from the wreck. Once at a secured location away from the prying eyes of the Soviet forces, the engines would be raised, loaded into crates and sent to RAF Gatow to be flown back to Farnborough for analysis.

As the British returned the bodies of Kapustin and Yanov to the Soviets, the engines and radar were on their way to the United Kingdom where they were studied by British technical experts. Within a 48 hour period the engines and radar systems were carefully returned to the wreckage of the Firebar and on 13 April 1966, the barge was sailed to the Soviet sector where the wreckage of the fighter was accounted for piece by piece before being handed over to Soviet authorities. As Bulanov supervised the recovery of the wreckage he noted that tips of the turbine blades within the jet engines had been removed. After accounting for the wreckage, the Soviets claimed that one part of the aircraft was still missing: the radar dish. The British denied this saying that everything they had had been turned over to Soviet forces, anything still missing was unrecoverable still on the bottom of the Lake. In reality, during the rush to recover and analyze the radar there was no time to return it to the wreck. Soon after, the British developed methods to deceive and exploit flaws in the Skipscan radar.

In the Soviet Union, Captain Boris Kapustin and Lieutenant Yuri Yanov were celebrated as heroes who valiantly gave their lives to save the lives of thousands of civilians by ditching their plane into the sea rather than crash into the populated city. Both men were posthumously awarded with the Order of the Red Banner for their exploits.
Posted by Unknown at 3:27 PM