Wings of the Crown: The Royal Air Force Germany (RAFG) 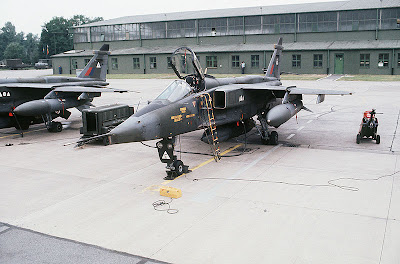 The Royal Air Force in Germany or RAFG was a command of the Royal Air Force stationed in West Germany throughout the Cold War.  It consisted primarily of those units located in western Germany following the end of hostilities of the Second World War. The RAF in Germany was continually adapted, upgraded and transitioned later to become part of the RAF's growing commitment to the defense of Europe from communist expansion during the Cold War.

RAF Germany units participated in numerous Cold War engagements particular Operation Vittles known in the United Kingdom as Operation Plainfare, the resupply of West Berlin by air following the Soviet blockade of West Berlin in 1948. Part of the success of this operation was the ability for RAF aircraft to be supplimented by aircraft flying directly from the British Isles. The RAF utilized its fleet of transport aircraft along with flying boats to assist in the massive resupply effort which finally ended on 12 May 1949 when the Soviet forces lifted the blockade. 40 British service members and eight RAF aircraft were lost during the duration of Operation Plainfare.

The command itself  was officially formed on 1 January 1959 by renaming the Royal Air Force's Second Tactical Air Force or 2TAF. It operated from numerous airfields and airbases across the former British zone of Occupation in Lower Saxony and North Rhine-Westfalia. Various fighter, reconnaissance, strike and transport aircraft  as well as their units saw service in West Germany throughout the Cold War prepared to defend against a Soviet or Warsaw Pact attack. RAF Germany also maintained a number of tactical nuclear weapons for deployment from strike aircraft at installations such as RAF Brüggen near Elmpt.

From 1954, Canberra bombers equipped six Royal Air Force Squadrons and flew primarily out of RAF Gütersloh. This realignment of forces was partially due to the overcrowding of suitable aviation facilities in the United Kingdom by not only Royal Air Force units but also their American counterparts. The Canberra bombers would later be removed from West Germany with the arrival of nuclear capable bomber aircraft thus providing the British nuclear contingent to NATO's massive retaliation doctrine in western Europe.

1955 saw a realignment of British forces in West Germany and many air bases were turned over to the newly formed West German Luftwaffe. Following the conclusion of the Suez Crisis in 1956, RAFG squadrons were reduced this was partially split between financial concerns and the growing nuclear deterrence in western Europe. The core of the Royal Air Force Germany contingent were with units assigned six Royal Air Force stations in West Germany:

Following policy review, after 1960 two Canberra bombers with their night fighting ability were equipped with tactical nuclear weapons and placed on alert prepared to be airborne within and headed into Warsaw Pact airspace within 15 minutes of receiving their initial alert. 1965 saw the arrival of one of the Royal Air Force's most capable interceptors the English Electric Lightning. These fighters would equip two squadrons No. 92 Squadron and No. 19 Squadron. 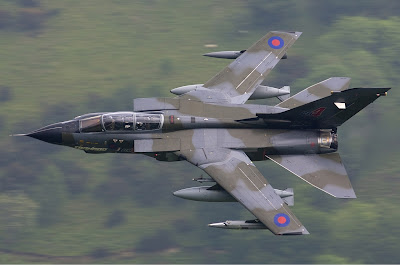 1961 saw the closure of RAF Jever and RAF Geilenkirchen which were subsequently turned over to Luftwaffe control and remaining RAf units were relocated to RAF Laarbruch and RAF Gütersloh. British capabilities were increased greatly in the late 1970s with the introduction of the SEPECAT Jaguar and the Hawker Siddeley Harrier. Both aircraft would be utilized in the close support role in support of Army ground forces in the event that Warsaw Pact forces invaded West Germany. Able to operate from uimproved surfaces across Germany, the Harrier with its vertical take off and landing capability was a formidable weapon. This allowed the RAF to disperse its forces from vulnerable air bases. RAF Strike units would operate from camouflaged rough bases in West Germany and positioned to launch strikes against advancing Soviet armored columns approaching from East Germany.

The RAFG's air superiority capabilities were also enhanced in the mid 1980s when the English Electric Lightning was withdrawn and RAF fighter units were equipped with the variable geometry swing winged Panavia Tornado fighter aircraft.

The strength of Royal Air Force Germany like its American counterparts greatly fluctuated depending on the commitments of the time. Elements of RAFG were withdrawn from Europe and went to support military operations during Operation Corporate, the war against Argentina in the Falkland Islands.