The Soldiers and the People are One: The Landstreitkräfte der NVA 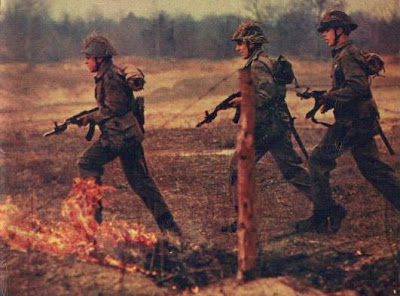 The Landstreitkräfte der NVA was the land component effectively the ground forces of the East German National People's Army. The Land Forces Command was officially located at Geltow and was established on 1 December 1972 as a management body created for the land forces. The Nationale Volksarmee having been itself was created on March 1, 1956 from varying units of the Kasernierte Volkspolizei which were specialized units of the police. Prior to 1956, the Soviet authorities in East Germany had been secretly rearming the eastern zone and providing oversight and training for a new armed body politically reliable to Moscow.

The Landstreitkräfte was envisioned as an all motorized infantry force tasked with conducting defensive or offensive actions to protect East Germany and her Soviet allies, or to attack Western Europe in conjunction with a larger combined Soviet offensive. It maintained a personnel strength of about 120,000 troops of which about roughly 60% were draftees performing their obligatory military service. The Landstreitkräfte maintained a force of 2 armored divisions, 4 motor rifle divisions, 2 surface-to-surface missile brigades, 10 artillery regiments, 1 dedicated anti-aircraft regiment, 8 air defense regiments, 1 airborne regiment, 2 anti-tank battalions, and various other support units. Most of the equipment supplied to the Landstreitkräfte was of Soviet design and origin, although some items in its inventory came from Czechoslovakia or elsewhere within the Warsaw Pact.

Uniforms worn by the Landstreitkräfte varied by period; early tunics were similar to those worn by the predecessor organization, the defeated Wehrmacht during World War II. From the mid-1970s through to 1990, officers and career personnel wore stone-grey gabardine tunics complete with white-piping around the collars and sleeves, also along trouser seams; although riding breeches which were used for parade were unpiped. These uniforms were inspired by the traditional Prussian influence of German history. Non Career NCO's and other enlisted men, including draftees performing their military service requirement wore wool stone-grey tunics, with unpiped grey wool trousers. From the inception of the Landstreitkräfte  in 1956 up until 1982 parade tunics were worn complete with decorative cuff bars on the sleeves. 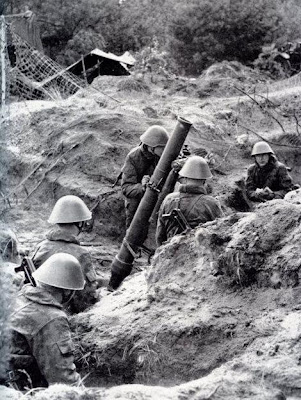 There were two main patterns of field uniforms worn by the Landstreitkräfte and these varied according to period. These were:

Other special units of the Landstreitkräfte included: