Structure of the Force: Ranks of the Bundeswehr

The West German Bundeswehr has gone through several variations of its rank structure with modifications and adaptations made throughout its existence. Initially upon the creation of the Bundeswehr there was a system of chevrons and metal insignia used to signify enlisted and non-commissioned officers as well as career officers. This system was phased out in the mid 1960s in favor of a rank system that is currently in use by the Bundeswehr. 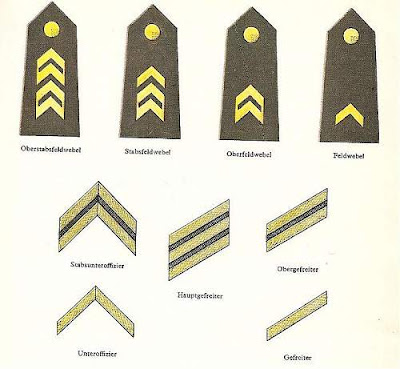 In all three branches of the Bundeswehr rank is determined along one of three career paths: Offiziere (Officers), Unteroffiziere (Non-Commissioned Officers) and Mannschaften (Enlisted Soldiers). Officers are further subdivided into Leutnante (Lieutenants), Hauptleute (Captains), Stabsoffiziere (Staff Officers), Admiräle (Admirals) or Generäle (Generals). Non-Commissioned Officers are classified along the lines of those and those that do not have a sword knot lanyard. The Heer and Luftwaffe ranks are identical in classification while those of the Bundesmarine and Sanitätsdienst (Medical Service) are different.

Specialized titles are often worn with rank titles in regards to the status of service of the soldier. After retirement from active duty former career soldiers are authorized to use their rank with the addition of the abbreviation a.D. which stands for ‘außer Dienst’ or retired. This is similar to the use of (Ret.) in the United States military following the retirement from active duty. Retired soldiers are also authorized to wear dress uniforms during formal social occasions however it is worn with a twisted black, red and gold cord worn at the base of the shoulder epaulette. In the Bundesmarine’s case this is signified with a golden letter ‘R’ on the epaulettes or shoulder sleeve.

Reservists add the abbreviation d.R. for ‘der Reserve’ or Of the Reserves after their rank this is only done when not on active service. When performing military service they are regular soldiers and this abbreviation is dropped. Soldiers may also wear colored lanyards which display the branch of which the soldier is serving some of these lanyards include: Silver for Offiziereantwärter or Officer Candidate,Gold for Feldwebelantwärter (Sergeant Candidate), or Black-Red-Gold for Reservist außerhalb Dienstverhältnis (Reservist without Employment). Officer, Sergeant and NCO candidates in the reserve add the abbreviations ROA, RFA or RUA while active officers, Sergeant or NCO candidates add OA, FA or UA to their titles respectively.

In the Heer and Luftwaffe rank is worn on epaulettes on both shoulders.

Officer Ranks of the Heer and Luftwaffe

Career officers in the Heer usually begin their military careers as enlisted personnel in an Officer Training Battalion. Following six months of the officer candidate training course in one of these battalions in which the candidate learns basic military drill and ceremony and military law and history the candidate will then progress to Officer’s Course 1. This course is three months followed by a 10 week training period for learning English and then another three months service as a regular soldier in an active military unit. After 15 months of service the officer candidate will then attend a Bundeswehr Academy and obtain a masters degree after three years of study.

After promotion to Leutnant the candidate progresses to Officer’s Course 2 at an Army Officer’s School and then on to Officer’s Course 3 at their respective branch school. They also attend specialized courses for survival or driving in regards to their branch. Follow the six years of training, the officer is then promoted to Oberleutnant and then transferred to their Army unit for regular military service.

In the Luftwaffe, officer careers begin with entry into the Luftwaffe Academy. Luftwaffe officer training consists of 11 months of basic military training, military drill and ceremony, theoretical education and several weeks in a training regiment as a deputy instructor with the rank of Obergefreiter OA. With the completion of the Officer Academy, candidates are promoted to Fahnenjunker before either progressing to a Bundeswehr Academy or beginning their basic flight training.

To progress to the rank of Major, a grade that only career officers can achieve officers have to complete the Field Grade Officer’s Course known as the ‘Stabsoffizierelehrgang’ or SOL. It takes a minimum of 10 years service to obtain the rank of Major with 17 years of service required to obtain the rank of Oberstleutnant. To reach the grade of Oberst or the highest grade for field grade officers promotion requires a minimum of 17 years of officer service for a total accumulation of 20 years of military service.

Unteroffiziere (Non-Commissioned Officers) in the German military like militaries around the world are the backbone of the armed forces. They are entrusted with the command of most sub-company units. Feldwebels and above ranks carry similar responsibilities as their commissioned officer counterparts. The focus on developing Non-Commissioned Officers lies in the German doctrine of ‘Auftragstaktik’ or ‘Fü
hren mit Auftrag’ or leadership through mission. This doctrine has been at the core of German military philosophy since the 19th Century. For the success of the Auftragstaktik doctrine, it is important that subordinate leaders understand the intent of their orders and are then given proper guidance and training as to act independently of the command. German military orders generally do not include specific instructions rather an intended task given a specific time and a means of accomplishing it the rest is left upon the small unit to accomplish thus German military orders give the small you a large amount of freedom and independent responsibility.

If a soldier has a specialized skill or apprenticeship that matches a specific military equivalent that soldier may start off with the rank of Unteroffiziere or Stabsunteroffiziere. In some cases, if a soldier holds a civil master craftsman equivalent he may start directly as a Feldwebel, this appointment is granted by the Army dependent on available positions. The position of Oberfeldwebel is usually attained after one year of service with the rank of Feldwebel. Promotion to higher grades requires appropriate time in grade and service and is also dependent on the soldier’s performance of duty. Soldiers in service for a minimum of 12 years may be appointed the rank of Hauptfeldwebel.

This also applies accordingly to the ranks of the Bundesmarine. In Naval service the ‘Feldwebel’ is known as a ‘Bootsmann’.

Enlisted Personnel in the Bundeswehr

Mannschaften is the term used for the enlisted personnel in the Bundeswehr. A large percentage of the enlisted corps is made up of conscripts conducting their required ‘Wehrdienst’ obligation which could be voluntarily extended to a maximum total of 23 months. Upon initial entry into the military a recruit is given the title of Schütze or ‘Rifleman’. Upon completion of primary recruit training, the soldier is then promoted to Gefreiter. This is usually completed from anywhere between three to six months of service depending on the unit. After an additional three months in service, the soldier is then eligible for promotion to the rank of Obergefreiter unless they fail the basic requirements of service. After nine months of service a soldier will usually obtain the rank of Hauptgefreiter for exceptional performance or after 12 months of completed service.

Promotion to Stabsgefreiter is granted after three years of enlisted service and with higher qualification, a soldier may be promoted to Hauptgefreiter (some cases with advanced education a soldier may enter military service as a Hauptgefreiter). Soldiers have the option to sign long term contracts as enlisted men but most will apply for Non-Commissioned Officer careers. Some soldiers will fail the NCO training requirements and thus opt to serve out their time as enlisted soldiers rather than be released from military service early. After four years of service, a soldier may be promoted to the rank of Oberstabsgefreiter. One unique note about the enlisted corps in the Bundeswehr is that enlisted men cannot issue orders to lower ranking soldiers unless specific circumstances apply such as when performing guard duties or ordered to do so through the Chain of Command. 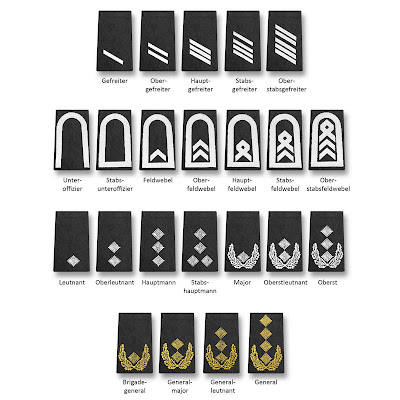 The initial entry grade of Schütze or Soldat is replaced by ranks specific to the soldier’s branch of service. Examples of this include: