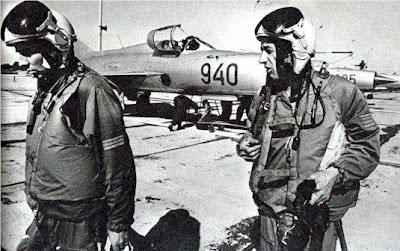 The Luftstreitkräfte / Luftverteidigung (LSK/LV) were the combined Air Force/ Air Defense Forces of communist East Germany. It was tasked with the prevention of hostile penetration of East German air space by foreign forces. Along with its sister services the Landstreitkräfte der NVA, the Volksmarine, and the Grenztruppen der DDR, it was a military branch of the combined Nationale Volksarmee.

The name Luftstreitkräfte was applied originally to the air service of the German Empire between 1910 up until the end of World War I in November 1918. It was selected as the name of the new East German Air Force when West Germany established the Bundeswehr in 1955 and its counterpart air service adopted the name Luftwaffe as used by the Nazi German Third Reich air arm from its inception in 1935 up until the defeat of Nazi Germany at the end of World War II in 1945.

The blueprints of the Luftstreitkräfte der NVA were laid in 1951 when air units were made subordinate to the Barracked Peoples People the Kasernierte Volkspolizei under the VP-Air. At the end of November 1953, a reorganization of air units within the newly established German Democratic Republic saw air units being transferred from the authority of the Ministry of the Interior directly to the Deputy Minister and Chief of the People's Police. Training of the air units began on several Soviet supplied types including An-2 Colt, MiG-15 Fagot, La-9 Fritz, Yak-18 and Yak-11 Moose aircraft. These air regiments were further reorganized into the Aero Club 1 located in Cottbus, 2 located in Drewitz and 3 located in Bautzen, which in turn were divided into two sections. Starting in 1954, additional Z-126 and M-1D aircraft from Czechoslovakian production lines were made available. 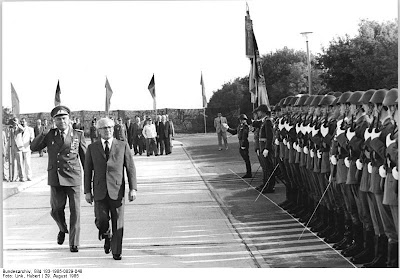 In 1961, under this new command the flying units, air defense missile units and radio technical troops formed two air divisions which were integrated into the greater Warsaw Pact. Another milestone was achieved in 1962 when the Luftstreitkräfte der received its first MiG-21 Fishbed interceptors. The MiG-21 would remain a potent weapon in the Luftstreitkräfte der NVA until the collapse of communist East Germany in 1990. Thirty one fighter bomber squadrons were established in 1971 which were to be used in coordination to assist Landstreitkräfte ground forces. Two combat helicopter squadrons were formed in addition in 1975. The mid-1970s and 1980s also saw the introduction of new types such as the MiG-23 Flogger and Su-22 Fitter aircraft. The Luftstreitkräfte again received a potent platform for its air defense in 1988 when it accepted the first deliveries of the MiG-29 Fulcrum into its inventory.

East German military aircraft assigned to the Luftstreitkräfte der NVA were identified by being marked with a diamond-shaped symbol divided into vertical black, red and gold stripes corresponding to the horizontal fesses or bars on the German Democratic Republic’s state flag. At the center of the diamond was the East German coat of arms consisting of a hammer and compass surrounded by a wreath of yellow grain. This symbol differentiated the Luftstreitkräfte der NVA from its West German Luftwaffe counterpart, which displayed a stylized Iron Cross similar to the emblem worn on German aircraft during the First World War.

The uniforms of the two distinctive German air forces were also different. Following an older German military tradition, Luftstreitkräfte / Luftverteidigung personnel worn uniforms in the the same stone gray color and make as those worn by Landstreitkräfte der NVA personnel, modified with distinctive blue insignia. These insignia were similar in style, but not color to insignia worn by the predecessor Luftwaffe of 1935 during the Second World War along with shoulderboards and piping. In contrast West German Luftwaffe uniforms, on the other hand, were blue with yellow insignia and more closely modeled on those worn by Luftwaffe personnel during World War II. 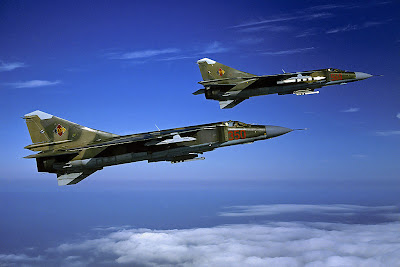 The East German Luftstreitkräfte / Luftverteidigung was unique among armed forces of other Warsaw Pact countries in that it was often equipped with the most advanced Soviet fighters and designs, instead of downgraded export models. As an extension of the Soviet 16th Air Army deployed in East Germany, the Luftstreitkräfte der NVA was expected to play a front-line role in any war with NATO. As a result of this doctrine, it was under closer Soviet control and enjoyed lesser autonomy than the air forces of other Warsaw Pact states.

The Luftstreitkräfte / Luftverteidigung maintained an overall personnel strength of about 39,000 troops of which about roughly 38% were draftees completing their compulsory military service. The Luftstreitkräfte / Luftverteidigung also had a higher ratio of officers and non-commissioned officers to enlisted than any of the other military branches of the Nationale Volksarmee. It also maintained nearly171 combat aircraft of varying types including combat helicopters.
Posted by Unknown at 1:26 PM