An Air Force Gains Its Wings: The West German Luftwaffe

The West German Luftwaffe is the aerial defense branch of West Germany. The term Luftwaffe is also the generic German term for an air force as well as being the official name for two of the four German air forces existent during the twentieth century, the Wehrmacht air arm which was founded in 1935 and later disbanded following the surrender of Nazi Germany in 1945 with the Luftwaffe disbanded in 1946;and the current Bundeswehr air arm founded in 1956.

German aviation in general was severely curtailed, and military aviation was completely forbidden when the Luftwaffe was officially disbanded in August 1946 by the Allied Control Commission. This changed when West Germany joined NATO in 1955, as the Western Allies believed that West Germany was needed in view of the increasing military threat posed by the Soviet Union and its Warsaw Pact allies. Throughout the following decades, the West German Luftwaffe sometimes referred to as the Bundesluftwaffe was equipped mostly with American designed aircraft manufactured locally under license. All aircraft sported and continue to sport the Iron Cross on the fuselage, reminiscent of the days of the Imperial Air Service of World War I, while the national flag of West Germany is displayed on the tail.

Many well-known fighter pilots who had fought with the predecessor Luftwaffe in World War II joined the new post-war air force and underwent refresher training in the U.S. before returning to West Germany to upgrade to the latest U.S. supplied hardware. Of these pilots returning to service included Erich Hartmann, the highest-ever scoring ace (352 enemy aircraft destroyed), Gerhard Barkhorn (301 aerial victories), Günther Rall (275 aerial victories) and Johannes Steinhoff (176 aerial victories). Steinhoff, who suffered a crash in a Messerschmitt Me 262 shortly before the end of the war that resulted in lifelong disfigurement including scarring of his face and other parts of his body, would eventually become commander-in-chief of the Luftwaffe, with Rall as his immediate successor. Hartmann retired as an Oberst (Colonel) in 1970 at age 48. Josef Kammhuber who also served in the post-war Luftwaffe would retire in 1962 as Inspekteur der Bundesluftwaffe (Chief Inspector of the Federal Air Force).

When the Luftwaffe was established in January of 1956, it faced a major problem a lack of technical expertise particularly in establishing a modern Air Force. More than ten years had passed since the World War II Luftwaffe was disbanded and basics of operating and supplying an air force as well as the widespread usage of jet powered aircraft, missile armed air defense systems and a focus on nuclear weaponry had changed. The Luftwaffe leadership was organized into two groups Air Force Group North and South respectively in alignment with NATO structures coordinated by the United States Air Force and British Royal Air Force. The boundary area between the two groups was set between Aachen and Kassel. In 1957, a number of army air defense troops were absorbed into the Luftwaffe to establish an Air Force air defense service.

The first operational Luftwaffe units of the new West German Air Force was Lufttransportgeschwader 61 (61st Air Transportation Wing) in Erdung and the Jagdbombergeschwader 31 (31st Fighter Bomber Wing) nicknamed ‘Bölcke’ after World War I fighter ace Oswald Bölcke as the first flying and combat units respectively. The first Air Force troops reported for service in 1958. It was in this year that the Luftwaffe was also equipped with its first nuclear capability the Matador missile for the Canadian supplied F-86 Sabre fighters of Jagdgeschwader 71 (71st Fighter Wing) in Ahlhorn.

The first operational losses suffered by the Luftwaffe occurred on 22 October 1959 when two Luftwaffe F-84 Thunderstreak fighters of JG34 mistakenly crossed into Czechoslovakia and crashed. After an exhaustive search with no results the West Germans asked the United States for assistance in the investigation. The Czechoslovak government acknowledged the crash in November and that both pilots and the wreckage were in Czechoslovak custody. Both pilots were returned to West Germany through the Waidhaus border crossing point on 3 December 1959.

1960 saw the introduction of the Lockheed F-104G Starfighter and marked the beginning of the infamous ‘Starfighter Crisis’. During the 1960s, the "Starfighter crisis" developed into a serious political issue, as many Lockheed F-104 Starfighters crashed after being modified to serve for Luftwaffe purposes specifically in respects of modifications for terrain, weather, and ground mechanic support issues. In the duration of its Luftwaffe service, 292 of 916 Starfighters crashed, claiming the lives of 115 pilots and leading to cries that the Starfighter was fundamentally unsafe from the West German public, which referred to it increasingly as the Witwenmacher (widow-maker), fliegender Sarg (flying coffin), Fallfighter (falling fighter) and Erdnagel (tent peg, literally "ground nail"). The F-104 would continue to serve in the West German Luftwaffe up until its retirement in 1991 when it flew its final flight from Manching Air Base in Bavaria.

Johannes Steinhoff and his deputy Günther Rall noted that the non-German F-104s proved much safer – the Spanish Air Force, for example, lost none of its F-104s during this same period. The Americans blamed the high loss rate of the Luftwaffe F-104s on the extreme low-level and aggressive flying style of West German pilots rather than any faults in the aircraft itself. Steinhoff and Rall immediately went to the United States to learn how to fly the Starfighter under Lockheed instruction and noted several particulars in the training which included a lack of mountain and foggy-weather training, combined with handling capabilities such as sharp start high G turns of the aircraft that could cause accidents.

Upon return to Germany, Steinhoff and Rall immediately changed the training regimen for the F-104 pilots, and the accident rates quickly fell to those comparable or better than other air forces operating the type. They also brought about the high level of training and professionalism carried on today throughout the Luftwaffe, and the start of a strategic direction for Luftwaffe pilots to engage in tactical and combat training outside of Germany. However, the F-104 never lived down its reputation as a widow-maker and was replaced much earlier by the Luftwaffe than other national air forces. 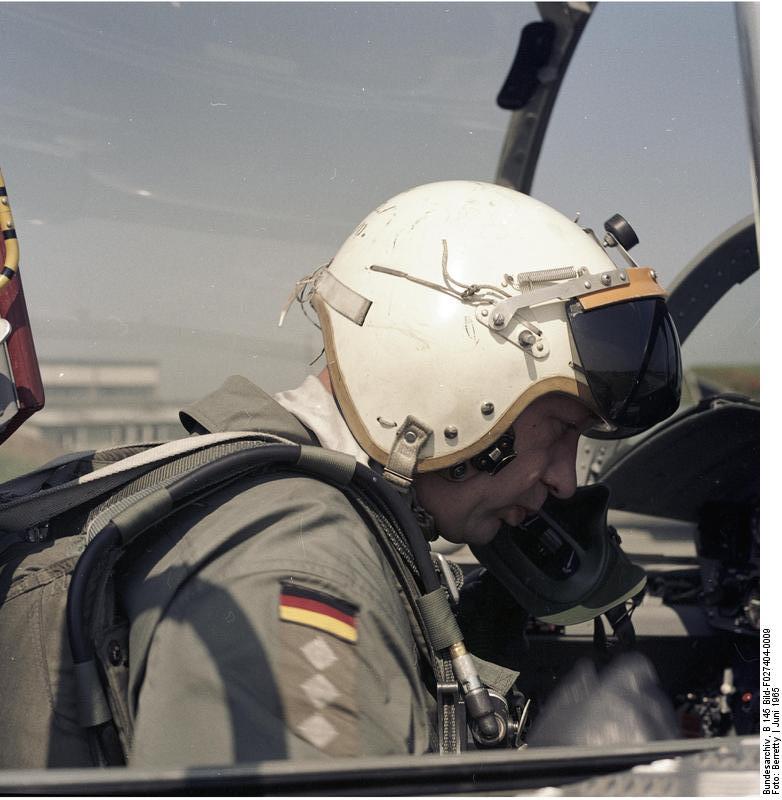 The Starfighter was replaced by the American-built McDonnell Douglas F-4 Phantom II fighter and the Panavia Tornado fighter-bomber; the latter was designed and produced by a cooperative of companies from the United Kingdom, Germany, and Italy. These fighters remain in Luftwaffe service today, with upgrades to their electronics and the addition of the AIM-120 AMRAAM air-to-air missile for the air defense of Germany the introduction of the Phantom and Tornado will be discussed later.


Following concerns that an attack from the Warsaw Pact would cut off Air Force Group North Command particularly in Schleswig-Holstein, the Air Force Command was restructured and the Seventh Air Division was stood up to carry out the duties of the Northern Command should an attack happen. Although they had been training in North America since being established in 1956, 1966 saw an increased tempo of German operations in the United States and Canada when Deutsche Luftwaffenausbildungskommando USA/Kanada (German Air Force Training Command United States/Canada was established at Fort Bliss, Texas. Training for air defense, missile troops and basic flight training would be conducted in the United States. The German Luftwaffe would also establish a second foreign based Ausbildungskommando in Beja, Portugal however this station would never be as significant as it's counterpart in the United States.

1967 saw an increased phase of modernization and reorganization in the West German Luftwaffe which lasted until 1970. Numerous new weapon systems would be introduced in the following years including the C-160 Transall in 1968, the conversion to the McDonnell Douglas F-4 Phantom II in 1974, the first flight of the Panavia Tornado and its subsequent introduction into service in 1984 with the Luftwaffe taking delivery of some 212 Tornados. Other milestones included the introduction of the Alpha Jet in 1985. German Luftwaffe air defense services primarily operated the Nike Hercules missile system which was replaced by batteries of MIM-104 PATRIOT in 1986 and the Roland system in 1987. From 1965 through 1970, two surface-to-surface missile wings Flugkörpergeschwader fielded 16 of the Pershing I missile systems with nuclear warheads under U.S. Army custody. In 1970, the system was upgraded to Pershing IA with 72 missiles. Although not directly affected by the 1988 Intermediate-Range Nuclear Forces Treaty, the Luftwaffe unilaterally agreed to the removal of the Pershing IA missiles from its inventory in 1991, and the missiles were destroyed. By the end of the Cold War there were nearly 100,000 active soldiers in Luftwaffe service. 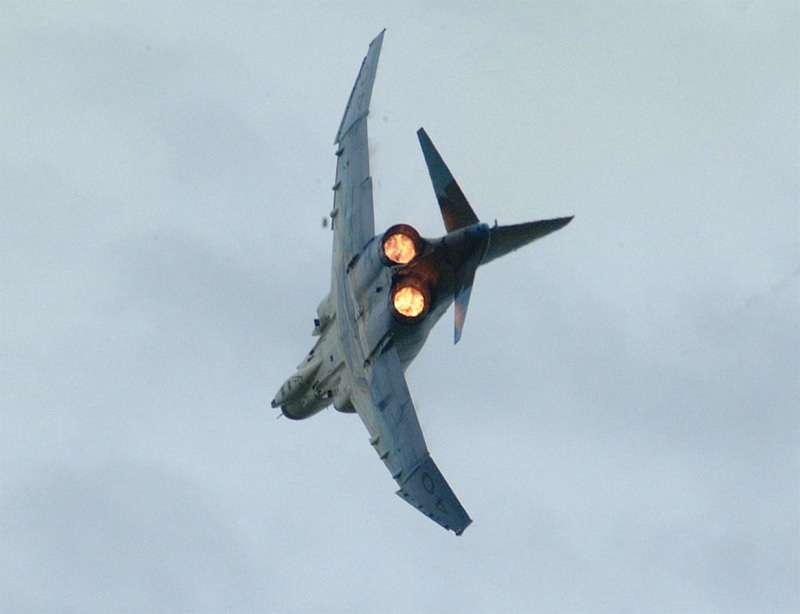 After East and West Germany were unified in October 1990, the aircraft of the former East German NVA were taken over by the Federal Republic of Germany, and their GDR markings were replaced by the Iron Cross, the first time Soviet-built aircraft had served in a NATO air force. Most of these were taken out of service, in many cases being sold or given to the new Eastern European members of NATO, such as Poland and the Baltic states.

An exception to this was the Jagdgeschwader 73 "Steinhoff" (Fighter Wing 73 "Steinhoff") stationed in Laage in the former East. The pilots of the JG 73 flew MiG-29s acquired during the reunification and were some of the most experienced MiG-29 pilots in the world. One of their primary duties was to serve as aggressor pilots, training other pilots in dissimilar combat tactics. The United States sent a group of fighter pilots to Germany during the Red October exercise to practice tactics against the aircraft they were most likely to meet in real combat. The MiG-29s of JG 73 were fully integrated into the Luftwaffe's air defense structure and, from February 1995 became the first Soviet Bloc aircraft to be declared operational within NATO.

The United States provides nuclear weapons for use by Germany under a NATO nuclear sharing agreement. B-61s stationed at Nörvenich and Memmingen Air Base (fighter-bomber wing JaBoG 34 "Allgäu") have already been withdrawn in the mid- to late-1990s. All nuclear bombs formerly stored at the Ramstein Air Base have been returned to the U.S. or elsewhere (the U.K. is possible), due to ongoing construction work at Ramstein AB, and they will not be returned to Germany. 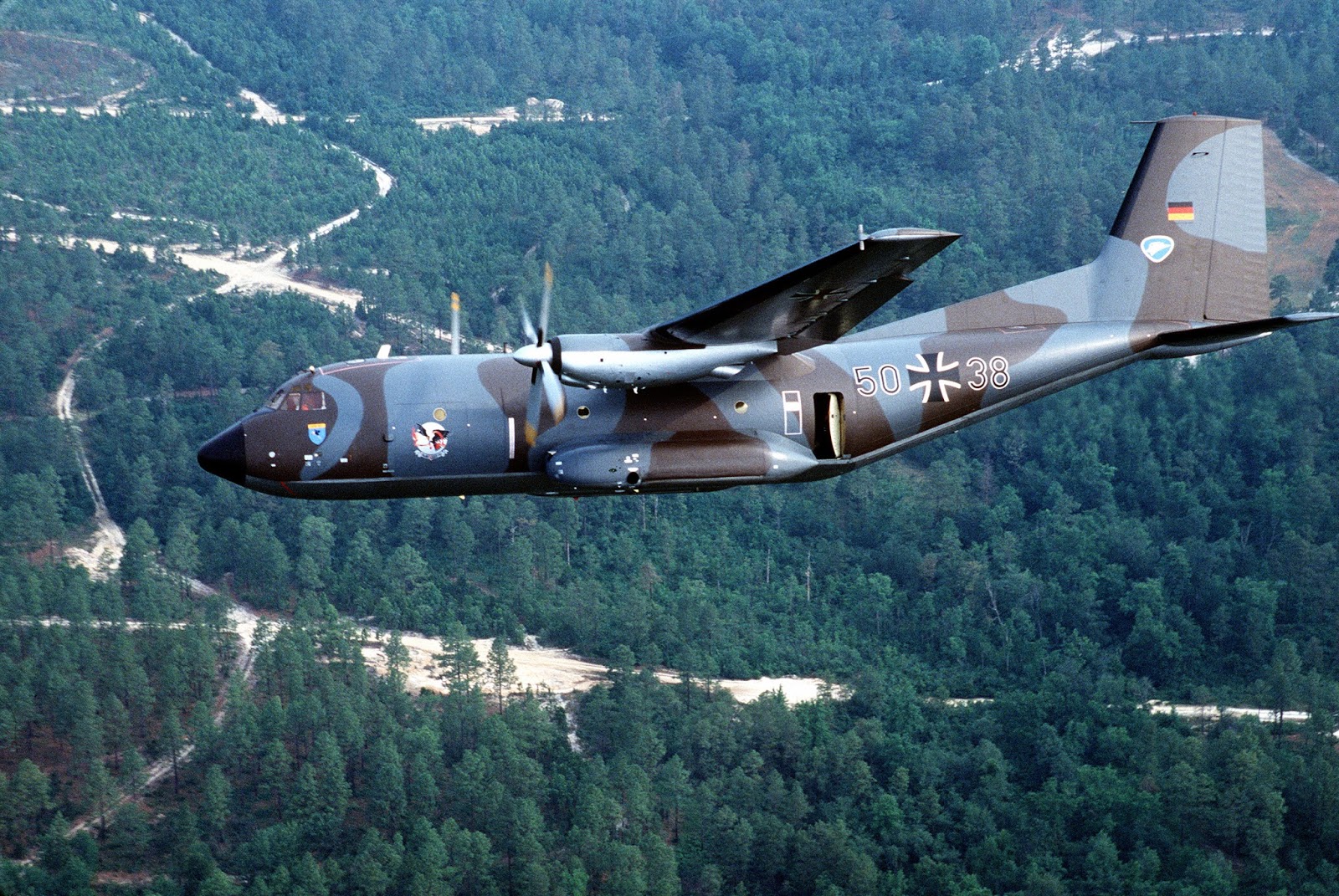 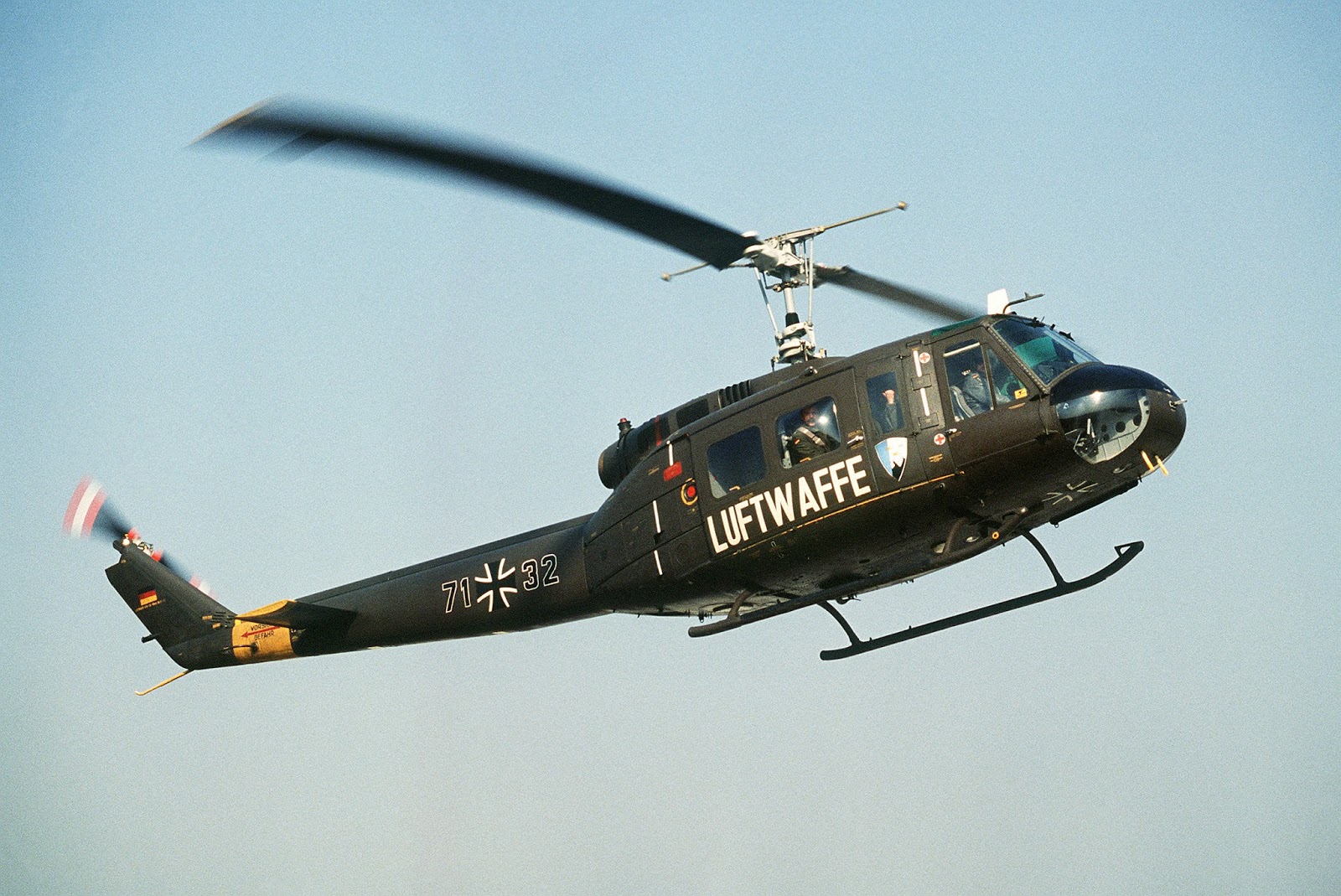