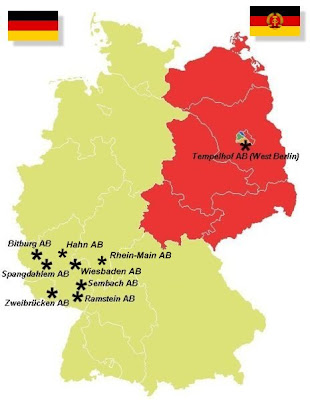 Since the defeat of Germany on 7 May 1945 the United States military has maintained numerous air bases across western Germany initially beginning as postwar occupation forces. During the Cold War period, the number of bases was expanded as commitments increased in support of the NATO alliance.

At the end of the Second World War, the United States Army Air Force bases in the U.S. Zone of Occupation in Germany were selected at a time when there were no requirements for tactical or defensive planning. Army Air Force planners simply selected suitable facilities which were left intact from the air campaign during the war. Many of these facilities were former Luftwaffe bases in the American occupation territory which were in turn repaired and used for accommodating increasing transport and occupation duties.

The initial airbases and units in the American Occupation Zone in 1947 at the time of establishment of the separate United States Air Force were:

With the exception of Frankfurt am Main Airport and Tempelhof Central Airport, these bases were all located across southern Bavaria.

With the Berlin Blockade and the rapid chilling of relations with the Soviet Union by mid 1948 it became obvious to USAF planners that these bases were tactically unsuitable due to their close proximity to the East German and Czechoslovakian borders. A surprise attack on West Germany would leave these facilities in the direct path of advancing Warsaw Pact forces.

With the creation of NATO in response to Cold War tensions in Europe, United States Air Force Europe wanted its vulnerable fighter units in West Germany relocated west of the Rhine River to provide greater air defense warning time. France quickly agreed to provide air base sites within their zone of occupation in the Rheinland-Palatinate as part of the NATO expansion program. These new sites would all be positioned fifty miles or more west of the Rhein River and most were positioned on rolling hilltops in rural settings.

Land acquisition in the Rheinland-Palatinate region was rapid, and during 1951 construction began on six new air bases. These bases were not funded by NATO, but by USAF funds partially offset by German war reparation payments. Construction was performed primarily by West German contractors as a result completion was on time and the quality of these new facilities were high. Bases at Pferdsfeld and Zweibrücken were built with USAF funds, but were ironically assigned to the Royal Canadian Air Force in 1952.

In 1968 the RCAF moved its forces south to Lahr and Söllingen in Baden-Württemberg and facilities such as Pferdsfeld Air Base were turned over to the West German Luftwaffe, and Zweibrücken Air Base was returned to United States Air Force Europe command.

Major USAFE Air Bases and units in West Germany during the Cold War were:

HQ USAFE was at Wiesbaden Air Base until 1973, when it was then relocated to Ramstein Air Base. Wiesbaden Air Base was turned over to the Army in 1975 in exchange for Army facilities in the Ramstein-Kaiserslautern area. The USAF, however, remained at Lindsey Air Station in Wiesbaden until 1993.

These bases served the USAF well for over 40 years, keeping the peace in Western Europe. 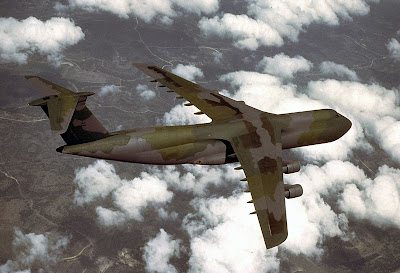