A Navy of the People: The Volksmarine 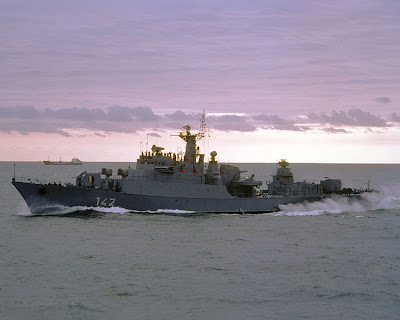 The Volksmarine or People's Navy was the official designation of the maritime forces of the German Democratic Republic. It was tasked to serve as a forward naval and amphibious transport component of the Warsaw Pact Fleet in the Baltic Sea. It was part of the Nationale Volksarmee established in 1956.

Soon after the end of hostilities and the conclusion of the Second World War, the Soviet Union began initiating the rearming of its satellite state in East Germany. This included the gradual formation of maritime forces which would become the future Volkspolizei See. Beginning in 1950, Soviet naval officers helped to establish the Hauptverwaltung Seepolizei (Main Administration Sea Police), which was renamed Volkspolizei-See (VP-See) or People's Police - Sea on 1 July 1952. At the same time parts of the erstwhile maritime police were reorganized into the new Grenzpolizei-See, Border Police Sea, to guard the sea frontiers and maritime borders. The Grenzpolizei-See was later incorporated into the Deutsche Grenzpolizei, German Border Police that would later become the Grenztruppen der DDR that had been set up in 1946. By 1952 the VP-See is estimated to have numbered some 8,000 personnel.

One of the traditions carried into the formation of the future Volksmarine was the commemoration of the sailor’s revolt in during the Kiel mutiny at the end of the First World War. The Kiel Mutiny in which German sailors refused to follow orders to engage the British Royal Navy fleet at the end of the First World War which then saw an alliance between the sailors and the workers back at the port in Kiel and was championed by Soviet authorities and championed as part of the greater socialist November Revolution in 1918 which led to the overthrow of the German monarchy and the rise of the Weimar Republic.

On 1 March 1956, East Germany formally created its Nationale Volksarmee (NVA) (National People's Army), and the VP-See became the Verwaltung Seestreitkräfte der NVA (Maritime Forces Administration of the NVA) with a strength of about 10,000 men. In November 1960, these maritime forces of the Nationale Volksarmee were officially designated as the Volksmarine effectively the ‘People's Navy’. Over the next several years the navy gradually received a number of new ships, primarily built in shipyards across East Germany. Only the coastal protection ships and some of the fast torpedo boats were provided by the Soviet Union, as were all helicopters, and some auxiliary craft which were purchased from neighboring Poland.

Following the construction of the Berlin Wall on 13 August 1961 the Grenzbrigade Küste der Grenzpolizei (GBK) or Coastal Border Brigade of the Border Police was incorporated into the Volksmarine. Command was assumed under the Ministry of National Defense on 15 September 1961. Volksmarine authority over naval coastal patrols began on 1 November 1961. In 1962, the Volksmarine was mobilized with a common knowledge between the East German government and Soviet authorities in response to the Cuban Missile Crisis. The movement of missiles and military personnel to Cuba had been known as Operation Anadyr but the mobilization of Volksmarine forces ended on 21 November 1962 and by the 28th of November the removal of Soviet missiles from Cuba had begun. With the reorganization of 1965; all attack forces, including, the fast torpedo boats, were combined into a single flotilla designated as the 6th Flotilla was stationed on the Bug peninsula of the island of Rügen. In the 1970s the People's Navy had grown to about 18,000 men. 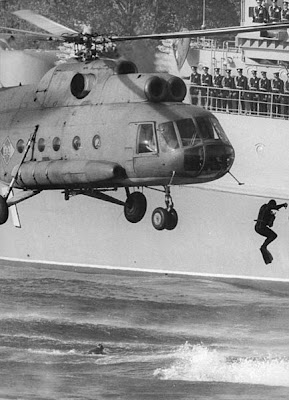 In the 1980s some of the ships were replaced and the People's Navy acquired Soviet-built fighter-bomber to equip a naval aviation unit which was designated as Marinefliegergerschwader 28 which was established in August 1985. The unit was granted the title ‘Paul Wieczorek’ in standing communist tradition. MFG-28 was stationed out of Laage and operated a force of 24 Sukhoi Su-22M-4 Fitter fighter bombers. Initially it fell under the command of the Luftstreitkräfte / Luftverteidigung with operational subordinate status to the Volksmarine. MFG-28 was tasked to provide tactical air support for joint fleet operations with the Soviet Navy, including anti-submarine warfare. It maintained pilots and ground crews for a squadron of jet fighter-bombers and two squadrons of helicopters. Its personnel wore Navy dark blue tunics with unit-distinctive insignia.

From 1986 up until 1988, the Volksmarine had a brief hostile confrontation with Polish naval forces over a maritime border dispute in the Oder Bay region. The confrontation ended peacefully when a treaty was signed following subsequent negotiations on 22 May 1989 when the first boundary correction was made since 1949 and about two thirds of the disputed maritime areas were allocated to the German Democratic Republic. This was recognized again on 14 November 1990 with the German-Polish Border Treaty following German reunification.

The Volksmarine was officially disbanded, like all other branches of the National Volksarmee, on 2 October 1990 the day before the official reunification of Germany. Some of the Volksmarine staff were absorbed into the Bundesmarine which was henceforth redesignated as the Deutsche Marine and others were incorporated into the German Border Police, the Bundesgrenzschutz. Most of the ships and other equipment were scrapped or sold as military assistance to other countries.

During its existence, the Volksmarine was operationally incorporated into the United Baltic Sea Fleets of the Warsaw Pact states. Its designated area of operations was the Baltic Sea and the entrances to the Baltic Sea. Its primary task was to keep the sea lanes open for Soviet reinforcements and to participate in offensive actions against the coasts of hostile nations in the Baltic Sea. For these purposes, it was equipped with light forces such as anti-submarine ships, fast torpedo boats, minesweepers as well as landing craft. Routine duty was heavily focused on extensive reconnaissance and surveillance activities, carried out covertly mainly by the minesweepers and specialized electronic surveillance boats.

The 6th Border Brigade Coast had a special responsibility in carrying out the prevention of Republikflucht the term used to refer to ‘Desertion from the Republic’. With effect from 1 November 1961 it was subordinated to Volksmarine command. It had a substantial number of small patrol boats in its inventory along with a network of surveillance posts along the coast, and its task was to prevent anyone from leaving the German Democratic Republic without official exit permission.

The Grenzbrigade Küste or Coastal Border Patrol maintained a force of about 2,750 sailors, out of the Volksmarine's total force complement of 16,300 personnel. Included 8 patrol boat groups and land units for patrol of littoral regions. Its personnel wore standard Navy uniforms, with unit-distinctive insignia.

The Volksmarine was equipped with a number of vessels of varying displacement the larger of these ships being Frigates and various other types including Amphibious Landing Craft, Minelayers and minesweepers, Fast Torpedo and Missile Boats, Coastal Defense Ships, Submarine Hunters, Intelligence Ships, Training Ships, & Support Craft. The Volksmarine also maintained three squadrons of combat helicopters as well as the fighter-bombers of MFG-28.

The Volksmarine maintained a force of about 16,300 sailors of which about 50% were draftees performing their compulsory military service.