Who was Paul Wieczorek? 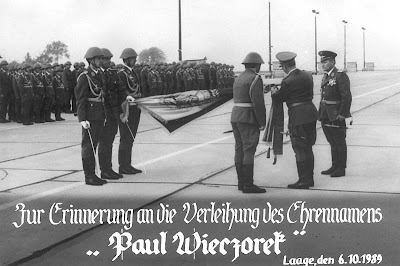 To many western observers the names bestowed upon Nationale Volksarmee combat units in the German Democratic Republic are but enigmas lost to history. East German military traditions and heritage often centered around figures of cultural significance and particular interest to the 'people's struggle' towards the progression of the communist movement. One of the most famous of the East German military units with a named title is the 40. Fallschirmjägerbatallion which was granted the title of 'Willi Sänger' after the pro-communist resistance fighter who was executed by the Nazis in the latter years of the Second World War. When the Soviet authorities took over administration of the eastern zone of Germany after the cease of hostilities the use of German communists and others sympathetic to the struggle of communism was seen as a way to allow the German people to embrace the struggles of communism and the exploits of their own people.

Paul Wieczorek, was another famous figure of East German military tradition. Paul Wieczorek was born in the largely protestant city of Bromberg in Prussia on 15 July 1885. In 1904, he and his family relocated from Bromberg to Berlin. After completing his schooling, he took up an apprenticeship in metalurgy becoming a metal worker. By 1903, he enlisted in the Kaiserliche Marine or 'Imperial Navy' of the German Empire. He would serve in the Imperial Navy until 1906, serving among other assignments aboard the light cruiser Medusa. Following his brief military service, Wieczorek found employment as a bus driver for the German company Allgemeine Berliner Omnibus AG. It was around this time that he became introduced to the teachings of Karl Marx and communism and become a member of the Sozialdemokratische Partei Deutschlands 'Social Democratic Party of Germany' or SPD.

With the assassination of Archduke Franz Ferdinand by a Serb nationalist and the outbreak of hostilities in 1914, Wieczorek was reinstated into the Kaiserliche Marine at the rank of Maat or Petty Officer aboard a minesweeper. Now a committed communist, Wieczorek was reprimanded numerous times by his superiors for insubordination and military disobedience. With the emergence of a new form of warfare, and the advances taken in military aviation, Wieczorek volunteered to become an aircraft mechanic in the fledgling Marineflieger of the Imperial German Navy. Following receiving flight training, he was assigned to a military air station located at Tonder near the border with Denmark. Here he was involved in a plane crash and following a period of recovery, he was reassigned to the Marine-Landfliegerabteilung 'Naval Land Flying Service' at  Johannisthal near Berlin. It would be here that he and a friend Fritz Radtke would organize workers of the Johannis Thaler Flugzeugwerke and spread the influence of communist works amongst fellow members of the naval aviation service and military air service.

By November of 1918, Germany was facing internal struggles and with the Kiel Mutiny of naval sailors in the Wilhelmshaven fleet an increasing wave of descent swept over the crews of several battleships of the High Seas Fleet. The Kiel Mutiny would become one of the factors leading to the November Revolution in 1918. Aligning himself with prominent Marxist and anti-militarist Karl Liebknecht, Wieczorek organized other mutineers and mounted an armed insurrection at the base in Johannisthal. On 9 November 1918, pro-communist sailors and naval aviators as well as members of the illegal Spartacus League seized control of the Flugplatz Johannisthal and arrested the base commander and the officers cadre. Following the completion of the seizure of the airbase, Wieczorek and his group began heading in the direction of Berlin to link up with Karl Liebknecht and his fellow group of communist supporters. Along the way to Berlin, the group encountered armed resistance from military forces loyal to Kaiser Wilhelm II particularly in the areas of Lower Schöneweide and Treptow. Many soon sided with the revolutionaries and large quantities of weapons and ammunition were turned over to the revolutionaries.

Records become scarce after this point but it was presumed that Wieczorek and his men participated in a clash and occupation of the Reichsmarineamtes 'Imperial Naval Office' in Berlin. By the evening of the 9th of November, Wieczorek, Radtke and Liebknecht linked up and and along with Heinrich Dorrenbach a fellow socialist revolutionary and an officer in the Imperial German military began drawing up plans for the organization of armed formations in Berlin. By the time of the armistice and cease of First World War hostilities on 11 November 1918, some 600 sailors that had aligned themselves with Wieczorek and Liebknecht were using the Berlin imperial stables as their headquarters and declared the organization of the Volksmarinerat von Groß-Berlin und Vororten 'People's Naval Council of Greater Berlin and Suburbs. They organized themselves into a group they called the Volksmarinedivison 'People's Navy Division' and declared Wieczorek as their Commander.

From its inception on 11 November 1918, things would begin to rapidly deteriorate for the Volksmarinedivison. In a coup of leadership, Paul Wieczorek was shot dead by Korvettenkapitän Friedrich Brettschneider in the Berlin imperial stables they declared their headquarters. Susequently two days later, Brettschneider himself was also found dead.  The November Revolution would ultimately fail when resistance was put down forcefully, however it would lead to the abdication of the throne of Germany, the abolishion of the monarchy and the transition to parliamentary democracy. Liebknecht would not fare any better suffering the same fate that befell many communist revolutionaries in Germany.  On 15 January 1919, Karl Liebknecht was found in his Berlin apartment and arrested being placed under the custody of the Garde-Kavallerie-Schützen-Division 'Guards Cavalry Rifle Division' of the Freikorps were he was interrogated, beaten and finally shot to death.

After the end of the Second World War, Soviet authorities in the eastern sector of Germany installed the pro-communist regime and began advocating the use of German communists amongst the new government to unite the people under their exploits. In 1985, the East German communist party authorized the formation of a naval aviation wing or Marinefliegergeschwader to be operated by the Volksmarine. Organized under the strictest orders of secrecy, the new unit was officially established on 27 November 1987 at Rostock-Laage. The unit was designated Marinefliegergeschwader 28 (MFG-28) and granted the title 'Paul Wieczorek' on 6 October 1989.
Posted by Unknown at 5:50 AM