Violence in the East: Crushing the Workers Uprising of 1953 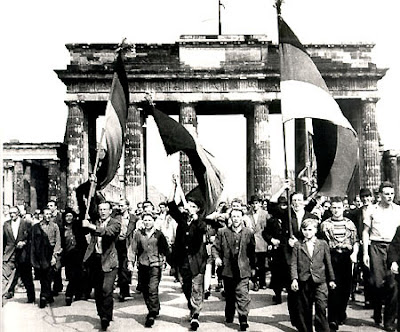 Since its inception as an 'ideology of the people' communism stood as a deception of human rights. Communist party leaders widely used the propaganda highlights of the advancement of communism often substituting the Marxist-Leninist ideology's terminology with the word 'socialism'. Officially everything was done with the interests of the people of the nation in mind. Everything was to be divided and shared equally upon the people, more specifically the working class. The 'nations of the people' often were referred to by the inclusion of the terms 'People' or 'Socialist' into the official names of the respective nation such as the People's Republic of Poland, Lithuanian Soviet Socialist Republic or the Czechoslovak Socialist Republic. Outwardly, the republics under the influence of the greater Union of Soviet Socialist Republics are model entities of freedom for the people to choose their own destinies for the greater good of humanity. In reality, they are most often corrupt totalitarian regimes with a near perverse domination over every aspect of life in the nations they govern. The governments of these regimes most often persecuted the very people they claimed to represent. The true face of Soviet style communism would flare up numerous times during the post war period in Europe with one particular event taking place in East Germany that would foreshadow events to come in the self proclaimed 'Worker's Paradise'.

The event that would show just how repressive the communist regime in the German Democratic Republic could actually be began in June of 1953, when a work party of some 300 construction workers tasked with the constructing the Stalinallee in East Berlin staged a strike against the ruling Sozialistische Einheitspartei Deutschlands or SED communist party. The workers strike could not have come at a more worst time for the government in East Germany. The year before reforms were enforced under the demands of Soviet premier Joseph Stalin for greater Sovietization of East Germany which forced farmers, tradesman and business owners to surrender to communism through raised fees. The economic crisis was worsening as military expenditures rose, along with reparations payments to the Soviet Union and with focus placed more on developing industrial capabilities rather than producing food and goods for the population, East Germany was soon faced with a severe crisis. By the beginning of 1953, the further problem of mass defections from East Germany often referred to as the 'brain drain' constituted a major economic and social problem for the new nation. Amongst these problems were also factors that included a high number of political prisoners in East German custody, as well as intensifying persecution of members of religious groups.

The Sozialistische Einheitspartei Deutschlands led by General Secretary Walter Ulbricht decided that in the face of these problems, norms for all workers would have to be raised. Work quotas would be increased by 10% with the workers wages generally remaining the same all while taxes and prices for goods and services would be increased. These measures were approved by the East German Council of Ministers on 28 May 1953 with a goal of them being fully implemented by 30 June 1953, the 60th birthday of East German leader Walter Ulbricht. The punishment for workers not meeting the new quotas would come in the form of  a reduction of salaries. 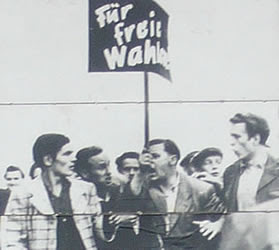 In response to the new directives, 300 construction workers in East Berlin went on strike protesting the new order and the directive that failure to meet increased quotas would lead to a reduction in pay. They marched down the Stalinallee voicing their displeasure with the government soon joined by more and more dissatisfied citizens. The spark of political dissidence soon spread across East Germany in the following days thanks partially by western radio broadcasts and word of mouth in the small communist nation. By 17 June 1953, Soviet troops assigned to the Group of Soviet Forces Germany began entering East Berlin and taking up positions to counter the increasing formations of striking workers assembled in public places heading towards the center of the city. At the sight of the mass strikers, the Volkspolizei as well as elements of the Kasernierte Volkspolizei were deployed however lacking instructions on how to deal with the situation they did not initially intervene.

Soon Volkspolizei and elements of the Freie Deutsche Jugend, the East German youth organization along with representatives of the SED communist party began making attempts to return the workers to their places of employment or to their homes. Most often these attempts proved futile and when these elements tried to restrain the growing numbers of protests they found themselves on the defensive as the groups often assaulted or chanted against them. Signs and banners were soon hoisted as more and more disgruntled workers and farmers arrived into East Berlin joining the movement towards the city center.  The angry demonstrators demanded a return to the previously established work norms, as well as labor reform, decreases in the price of goods and services, the release of fellow protestors who had been arrested by the Volkspolizei the previous day, and free elections for the people of East Germany without the influence of the Soviet Union. As the movement grew in East Berlin, protestors began shouting various slogans voicing displeasure in the SED such as "Death to Communism!", or "Down with the Government!", and even slogans voicing approval for the American that had commanded allied forces in the liberation of Germany from the Nazis during the Second World War such as "Long live Eisenhower!"

By 9:00a.m. some 25,000 people assembled at the House of Ministries followed by tens of thousands of additional protestors. By 11:00a.m. a large number of protestors stormed the government building celebrating and boasting that they had overpowered that they had defeated the force of 500 members of the Volkspolizei and members of the Ministerium für Staatssicherheit or Stasi. 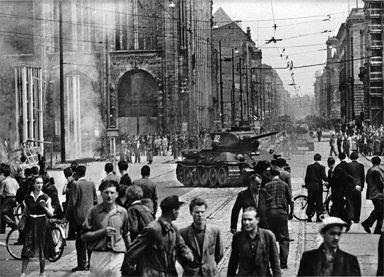 Soon the protests would turn violent as Soviet armored vehicles of the Group of Soviet Forces Germany pushed towards the government areas to curb a coup detat. By 12:00 the Soviet forces had cleared the area around the SED headquarters and soon fighting would erupt between disgruntled citizens and the combined force of Soviet military and East German Volkspolizei. Initially these were only small skirmishes but when the demands of the protestors turned to political demands, and the demonstrators began calling for the overthrow of the East German government, Ulbricht ordered that the uprising be quelled through the use of force. A force consisting of 16 Soviet divisions with 20,000 troops alongside 8,000 members of the Kasernierte Volkspolizei were ordered to quell the uprising.

One of the most significant clashes in East Berlin occurred along the Unter den Linden, a street between the Brandenburg Gate and Marx-Engels Platz which housed many government offices. Here a combined force of Soviet troops and Kasernierte Volkspolizei opened fire on the advancing protestors. Gunfire would erupt across East Berlin including along the Potsdamer Platz.

As the dawn of 18 June 1953 rose over East Berlin, a large number of East German citizens lay dead including not only protestors but also members of the SED communist party. Several thousand lay wounded with several thousand more in custody having been arrested by the Volkspolizei. Of these incarcerated a large number were tried and sentenced to death along with those executed when martial law was declared and it was even declared that several Soviet soldiers were executed for dereliction of duty when they refused to open fire on the East German protestors. No official figures of the number of people killed, wounded or imprisoned have ever surfaced regarding the 1953 uprising in East Germany however figures varied depending on who researched the incident. The West German Ministry of Inter-German Affairs released estimates reflecting a rather high casualty toll while the East German government remained mute about the incident. 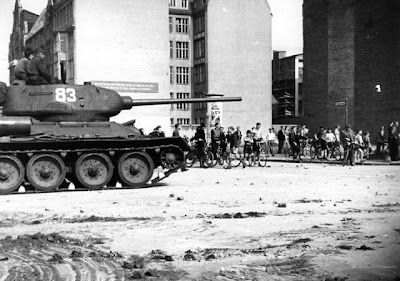 The East German Politburo would meet in the aftermath of the uprisings on 20 June 1953, with members of the SED expressing first hand encounters of the uprisings thus justifying the intervention of Soviet forces in East German affairs. The meeting also reaffirmed East Germany's request for Soviet forces to remain in position following the lift of martial law in East Berlin. Measures were also taken to increase the production of goods for the East German people as well as importing foods and raw materials into the German Democratic Republic to try and stabilize the economic situation of the nation.

As a response to the uprisings in the East, West Germany would commemorate the rebellion by declaring 17 June a national holiday, declaring it German Unity Day as a day to celebrate when the German people rose up and took a stance against communism.
Posted by Unknown at 6:28 PM