Initially British troops stationed in western Berlin were known as the British Troops Berlin from November of 1946, which administered to the occupational duties in the British designated zone of occupied Berlin. The first British unit to arrive in Berlin was the 7th Armoured Division, the notorious 'Desert Rats' which had garnered a reputation for ferocity in fighting the German Afrika Korps led by Erwin Rommel in North Africa. The unit would remain known as British Troops Berlin until all British occupational forces in West Berlin were redesignated as Area Troops Berlin in February of 1949. This formation would stand until October 1953, when it was reorganized into a force known as the Berlin Infantry Brigade Group. Under the reorganization, the force would maintain a strength of 3,100 soldiers assigned to one of three infantry battalions, an armored squadron and respective support units. Unlike its American counterpart, the British Berlin Brigade rotated entire units in and out of West Berlin for a specified period of time rather than rotating individual personnel in and out of the units assigned to the British zone of occupation in West Berlin. With the division of Berlin, the British would receive the central section of West Berlin, a sector comprised of four boroughs to occupy in the post war era. The four neighborhoods under British control was comprised of the boroughs of Charlottenburg, Tiergarten, Wilmersdorf and Spandau.

The British Forces Post Office which maintained a branch in West Berlin designated the British sector with the postal code BFPO 45.

The British maintained their forces in five barracks across its sector of the city, primarily in the borough of Spandau. The five British facilities were known as Alexander Barracks, Smuts Barracks, Brooke Barracks, Wavell Barracks and Montgomery Barracks. Three of the barracks were positioned in close proximity to the Spandau Prison where British troops along with elements of the other western Allies and the Soviets rotated standing guard over Rudolf Hess. Montgomery Barracks was positioned in close proximity to the border with East Berlin, and maintained a single infantry battalion. Brooke and Wavell Barracks both maintained single infantry battalions, while Smuts Barracks maintained the armored squadron assigned to West Berlin. Alexander Barracks was primarily an administrative and logistics facility. Units rotated in and out of West Berlin from across the United Kingdom including units from England, Wales, Scotland and Northern Ireland. Many soldiers assigned to West Berlin had combat experience having come to West Berlin from operational service during Operation Banner in Northern Ireland.

Initially the first incarnations of the British garrison, the British Troops Berlin and Area Troops Berlin would maintain its headquarters in a facility at the Fehrbelliner Platz in the borough of Wilmersdorf. Upon redesignation as the Berlin Infantry Brigade Group, the headquarters was relocated to a facilitiy located adjacent to the Olympic Stadium in the district of Charlottenburg. It would remain at this location until the dissolution of the Berlin Infantry Brigade in 1994.

Soldiers assigned to the Berlin Infantry Brigade wore a distinctive insignia. The unit's shoulder sleeve insignia was comprised of a red circle over a black background with the word 'BERLIN' in red on a black background arched across the top of the circular insignia. Although initially not assigned to British Army of the Rhine, by the 1980s it was considered a secondary component of BAOR after the I British Corps contingent which was positioned in North Rhine-Westphalia and Lower Saxony, West Germany.

The British maintained a large training facility in the Grunewald borough of West Berlin, where they would often train alongside soldiers of the American Berlin Brigade. The Grunewald complex was comprised of several training facilities including the American urban warfare training center known as Parks Range or more affectionately as "Doughboy City" as well as the British urban warfare training center known as Ruhleben Fighting City or 'RFC'. Further military training was conducted across the Grunewald borough along the shores of the Havel River, and along the Schildhorn peninsula. Other training areas included the Schildhornweg, Am Postfenn, around the Teufelssee or 'Devil's Lake', Saubuchtweg, Grunewaldturm area, Havelchausee which ran adjacent to the Havel River, and all the way down to the Avus. For woodland combat exercises, British forces utilized the wooded areas of Spandau, Gatow, Kladow, Tegel and Jungfernheide. Their primary range area was also located at Ruhleben however it was adjacent to the RFC compound. Later on in the Berlin Infantry Brigade's stay in West Berlin, additional live fire exercises were conducted in Gatow.

As a response to the British maintaining their firing rains in such close proximity to the border with East Berlin, the Soviets maintained a large armored vehicle training facility on the East German side of the Berlin Wall opposite of the British ranges.

The armored squadron assigned to Smuts Barracks was primarily tasked with armored reconnaissance and conducting mounted security patrols along the length of the Berlin Wall which spanned the British sector.

For ceremonial events, the British often utilized the Maifeld 'May Field' as a parade ground which was located across from the Olympic Stadium known as the Olympiastadion. The Maifeld was used annually to celebrate the Queen's Official Birthday for reigning monarch Queen Elizabeth II every 21 April. Formations of British troops and military vehicles would conduct a parade and review in honor of the Queens Birthday and would render honors such as honor salutes fired by tank mounted cannons and infantry rifles utilizing blank ammunition. Various members of the royal family would attend the celebrations including Queen Elizabeth II herself, Prince Charles, Princess Diana, Princess Anne and the Queen Mother. West Berliners were encouraged to attend these events alongside their British counterparts and partake in the festivities. Another largely popular event was the yearly 'Grand Tattoo' which was a large military show hosted by the Corps of Army Music. The Grand Tattoo was usually held at the Deutschlandhalle near famous Funkturm Berlin radio tower. The Deutschlandhalle is famously known for the 19 February 1938  indoor flight of German test pilot Hanna Reitsch in her Focke-Wulf Fw 61 helicopter, the first such flight of its kind.

For aviation support, the British Army stationed elements of the Army Air Corps at RAF Gatow. RAF Gatow was the primary airfield utilized by Royal Air Force transports bringing in supplies from West Germany during Operation Plainfare, the British codename for the Berlin Airlift. Following the Airlift, most offensive aircraft from the Royal Air Force were withdrawn and mostly transports and light aircraft were stationed at the facility apart from British Army aviation elements. A military formation known as the RAF Gatow Station Flight operated two  De Havilland Chipmunk T10 light aircraft in reconnaissance roles in cooperation with the The British Commander-in-Chief's Mission to the Soviet Forces of Occupation in Germany more commonly known as BRIXMIS. Intelligence flights were carried out beginning in 1956 under the codename Operation Shooner and later Operation Nylon, where the RAF aircraft would fly over the airspace of both West and East Berlin, as well as the air corridors to and from West Germany into West Berlin. These flights were legally guaranteed to the British under the Potsdam Agreement and they were often conducted to carry out covert photographic reconnaissance flights over East German territory.

A Royal Corps of Signals signals unit designated as 26SU was also assigned to RAF Gatow and on the Teufelsberg, a 260 foot artificial hill north of the Teufelssee which was made of the heaped rubble of Berlin following the Battle of Berlin in 1945 in the Grunewald borough. 26SU would serve as a specialized Signals Intelligence unit operated by the Royal Air Force on behalf of Government Communications Headquarters or GCHQ Cheltenham tasked with monitoring Warsaw Pact and Soviet military communications and activities over and around the German Democratic Republic and neighboring People's Republic of Poland. RAF Gatow was the site of a defection on 15 July 1987 when a young East German named Thomas Krüger flew a Zlin Z-42M light aircraft to RAF Gatow from Schönhagen near Trebbin, East Berlin. 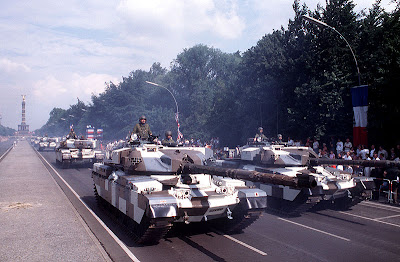 The last British infantry battalion to be stationed Berlin following reunification would be the 1st Battalion of The Queens Lancashire Regiment being assigned to Wavell Barracks from 1992 until the Berlin Infantry Brigade was disbanded in September of 1994. The disbanding of the Berlin Infantry Brigade was marked by a final parade through the former British sector which was attended by Prince Charles. With this, the British Berlin Infantry Brigade like the other members of the western Allies marched into history having stood vigilant watch over West Berlin through some of the most tense points in world history. Peace reigned and the Cold War was over, a victory for democracy worldwide.