Shturmovik Reborn: The Soviet Air Force and the Sukhoi Su-25 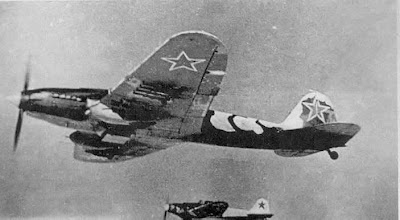 With the success of the Ilyushin design Il-2 Bark and Il-10 Beast ground attack platforms employed against Nazi forces during the Great Patriotic War, Soviet commanders realized the need for capable close air support aviation to assist ground forces early on. As technological advancements progressed and jet technology began to overtake the development of propellor driven designs, the problem soon began to arise in the form of replacement of these earlier designs in the ground attack capacity. By the 1960's Soviet fighter bombers in active service were unsuitable for ground attack roles. Their high operational speeds made them unsuited for delivering precision strikes and their loiter and time on target were minimal. Another drawback to existing Soviet fighter bombers such as the Sukhoi Su-7/ Su-17 Fitter, Mikoyan Gurevich MiG-21 Fishbed and Mikoyan Gurevich MiG-23 Flanker was their lack of suitable armored plating to protect the pilot and vital systems from ground fire. Having researched the influences that made the Ilyushin designs so successful during the Great Patriotic War and taking into consideration the drawbacks of existing fighter bomber designs, Pavel Sukhoi founder of the Sukhoi Design Bureau along with a team of aerospace engineers began preliminary design work for a new design that would meet the requirements of both the of the Ministry of the Aviation Industry and the Ministry of Defense.

The official request for a new battlefield close air support aircraft was issued by the Soviet Air Force in March of 1969. Four Soviet design bureaus responded to the announcement of the competition: Sukhoi, Yakovlev, Ilyushin and Mikoyan-Gurevich. Sukhoi's design officially designated as the T8 had been finalized in 1968 with the first two prototypes being built in 1972. The first of the prototypes was unveiled during the Soviet May Day holiday of 9 May 1974, however it would not take to the air until 22 February 1975. The competition was soon narrowed down between the Sukhoi T8 design and the Ilyushin designed Il-42. However following a series of fly offs and trials before the Soviet Defense Ministry, the Sukhoi design was chosen over the Ilyushin type and awarded a production contract. 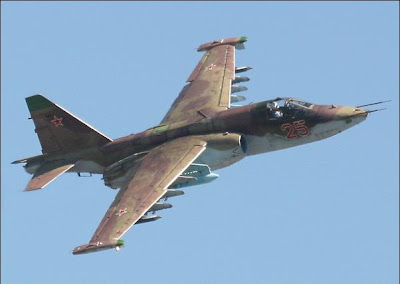 Production of the Sukhoi design now designated as Su-25 would begin at Factory No.31 located in Tbilisi in the Georgian Soviet Socialist Republic. With the first production models being delivered to the Soviet Air Force in 1978. It would be given the NATO reporting code of 'Frogfoot'.

The Su-25 has an all metal trapezoidal wing mounted at the shoulder of the fuselage, and a conventional tailplane and rudder system. The overall construction of the aircraft utilizes different metals and materials with nearly 60% of the airframe being made of aluminum, 19% steel, 13.5% titanium alloy, 2% magnesium alloy and 5.5% other materials. Initial versions of the Su-25 were equipped with twin R95Sh non-afterburning turbojets. The aircraft was designed as a single seat airframe with a single GSh-30-2 30mm cannon mounted in a compartment beneath the cockpit. The pilot sits in a titanium bathtub similar to that of the American Fairchild-Republic A-10 Thunderbolt and entry into the cockpit is by a hinged canopy. The cockpit is relatively cramped and the pilot sits rather low in the enclosure a trade off in visibility for protection to the pilot at the controls. A periscope assembly is attached to the top of the canopy in an attempt to improve rearward visibility for the attack pilot.

The Su-25 does not have a television guidance system but does have a nose mounted laser rangefinder for target designation capabilities an a DISS-7 doppler radar for navigation. It could operate in both day and night environments and is equipped with the SO-69 identification system, which serves as a friend or foe designation transponder. For defensive measures, the Su-25 has several countermeasures installed on the airframe, the first is the SPO-15 radar warning receiver and the second is a system of chaff and flare dispensers capable of punching off 250 flares and chaff to confuse enemy guidance systems. 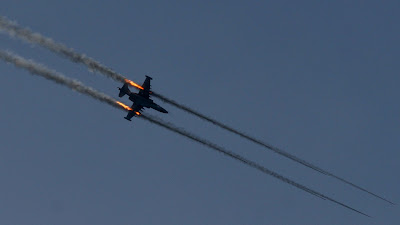 The first Soviet Air Force unit to receive the new type was the 200th Independent Attack Squadron, based at Sitalcay air base in the Azerbaijan Soviet Socialist Republic. The first eleven aircraft arrived at Sitalchay in May 1981. Soon afterwards this unit would be deployed to Afghanistan in support of Soviet military operations in the embattled nation. Throughout the duration of the Soviet counterinsurgency campaign against the Islamic Mujahedeen in Afghanistan, Soviet Air Force Su-25s launched nearly 139 guided missiles of varying types against Mujahideen positions in the wartorn nation. On average, each Su-25 flew 360 combat sorties per year, a total considerably higher than that of any other combat aircraft type in Afghanistan. By the end of the war, nearly 50 Su-25s had been deployed to airbases in Afghanistan and carried out a total of 60,000 combat sorties. Between the first deployment in 1981 and the end of the war in 1989, 21 aircraft would be lost in combat operations.

Su-25s were also deployed to airfields in the German Democratic Republic and the Czechoslovak Socialist Republic to support Soviet interests in the region and to counter NATO forces in the region. In the event of war with NATO, Su-25s would serve in similar roles to that of the American A-10 and British Harrier attack platforms flying close support missions against NATO positions utilizing their slow speed and design characteristics to get down in the folds of the terrain of the low altitude structure and provide accurate support for advancing Warsaw Pact forces. For self defense against intercepting NATO fighters, the Su-25 could carry the AA-2 or AA-8 air to air missile. The 30mm cannon would be employed against armored targets although, the Su-25s 30mm cannon did not match the rate of fire of the American GAU-8 Avenger 30mm cannon mounted on the A-10.

Like all Soviet designs, the Su-25 was a rugged machine designed with simplicity in mind and with the capability to operate in the harshest of conditions from roughly prepared airfields. It would go on to serve in successor nations after the dissolution of the Soviet Union and continues as a potent battlefield platform in the modern age. 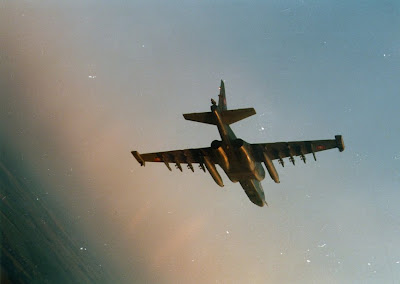