Conrad Schumann: The Man Who Lept Into History 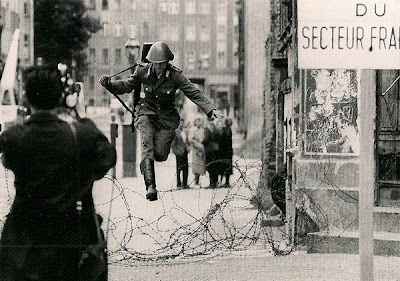 Many of the greatest events in world history are the result of seemingly insignificant acts that somehow forever alter the state of human affairs. It can also be proven looking throughout history that even though Generals and Commanders are given credit for victories, it is the enlisted man who actually fights to secure that victory. Their actions are rewarded through varying honors and citations for heroism or gallantry, but it is the General or Commander to whom the history books will record the victory in the name of. This same scenario goes for not only military engagements but also political statements in both war and peacetime. History knows it was Erich Honecker and Nikita Khrushchev who are responsible for initiating the order to begin the construction of the Berlin Wall around the allied occupied sector of Berlin. It is also recognized that Erich Honecker issued the order to shoot to kill persons trying to flee from the German Democratic Republic for freedom in West. But occasionally, there are certain everyday individuals whom in the face of increasing disagreement with policy or other acts will act on impulse and be forever etched into the face of history. One such case is that of Conrad Schumann.

Born Hans Conrad Schumann on 28 March 1942 in Zschochau, Sachsen, Germany, Conrad Schumann was young when the Second World War ended and Germany was divided up amongst the victorious allies. He would grow up in the Soviet occupied sector of eastern Germany which would later become the German Democratic Republic. He would go on to serve as a soldier in the Volkspolizei-Bereitschaften, the barracked paramilitary riot control police unit of the East German police. Following three months of training in Dresden, he was sent to a non commissioned officer's academy in Potsdam for advanced leadership. Shortly after the completion of the training academy, Schumann volunteered for service in Berlin. He would be given the rank of Sergeant.

At the time, Berlin was a hotspot of the Cold War. With allied military forces positioned in West Berlin deep inside the heart of the German Democratic Republic, Berlin would be potential ignition source for any future conflict in Europe. Citizens of the East German state were flooding into East Berlin hoping for the opportunity to escape to the West via defection into West Berlin. The so called 'Brain Drain' was severely damaging the East German economy as skilled craftsmen and laborers all fled to the relative freedom of the West. The decision was soon made by East German leaders with the approval of their Soviet allies to begin the construction of a protective barrier, a wall around the western sector of the city of Berlin to prevent further Republikflucht or 'Flight from the Republic'. The construction of the Berlin Wall would begin on 13 August 1961, with Soviet tanks and armored vehicles taking up positions at checkpoints and road crossings facing West as a deterrent while East German soldiers, policemen and laborers began stringing barbed wire and later began emplacing bricks for the Wall around the city. History would soon be made with a simple gesture which would begin in Soviet East Berlin and end in the French sector of West Berlin.

On 15 August 1961, Schumann was ordered to report to the corner of Ruppiner Straße and Bernauer Straße (Straße is the German word for Street) to stand guard during the third day of construction of the new Anti Fascist Protective Barrier as it was designated by the East German government. Schumann shouldered his MPi41 submachine gun, an East German variant of the Soviet PPSh-41 submachine gun and began his duty of standing guard along the low wire entanglement of barbed wire which comprised the Wall fortification. On the western side of the wire emplacement, citizens of West Berlin took notice of the young East German soldier standing his post. Soon, the West Berliners began shouting "Komm' rüber!" or "Come Over!" urging him to defect from the East German sector into the West. To assist in the escape, a West German police car pulled into position a short distance away and waited in case the young soldier chose to escape to freedom in the West. 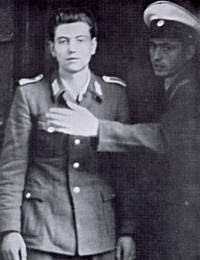 With the large gathering of Western citizens, Schumann's colleagues were soon distracted by the commotion. Using this distraction to his advantage, the 19 year old Schumann, swapped his loaded submachine gun for an empty one and began contemplating his future. Hesitating momentarily, Schumann then began determined to defect to West Germany and sprinted, leaping over the barbed wire fence he ran into the back of the waiting police car and was hastily driven away from the scene by the West German police. Schumann's defection was captured on film in the form a series of images taken by photographer Peter Leibing and also his entire escape including his preparations for the defection attempt which were captured on 16mm film from the same vantage point. As he made his way to the waiting police car, he was greeted with a barrage of cheering West Germans welcoming him to the West. The images of the young East German fleeing into the West were broadcast around the world and became an iconic symbol of the Cold War, particularly the quest for freedom by the oppressed people of the East. In that instant he became both a hero of the Free World, and a traitor to his East German compatriots.

The next stop for the young non commissioned officer was a debriefing station operated by the West German police in West Berlin. A simple and modest fellow, rather than ask for some special item, favor or treatment, all Schumann asked the West Germans for was a sandwich. When inquiries began by the West Germans as to why he chose to defect to the West rather than to remain in East Germany, he replied that he was angered by a scene presented to him during his time guarding the new barrier areas. The scene he described as an East German child who had attempted to flee into West Berlin being dragged back into East German territory by border guards. He stated that he did not want to live enclosed like some caged animal.

He would later be permitted to leave West Berlin and he relocated to Bavaria in southern Germany. He would meet his wife Kunigunde in the town of Günzburg. Günzburg is notoriously known as the birthplace of infamous Nazi medical officer Dr. Josef Mengele. Conrad and Kunigunde would get married and they would have a son. Schumann would find work first working briefly as a nurse and at the Grombacher winery before landing a job working on an assembly line for the Audi automobile company. Although, Schumann had left the German Democratic Republic he had never truly escaped. It would be a mixture of the unwanted fame and attention that would drive him into a deep state of depression. For the first decade after his famed defection, he took to alcohol to comfort him. Not one dollar of the money made from his defection images would go to Schumann or his family and even though an iconic figure of western propaganda, government officials only showed interest in gathering information from him that he did not have. Schumann described the inquiries from the German government as making him feel as if he was being Squeezed like a lemon.

For a long time, the only contact he had with his family in East Germany were through letters which were being influenced by agents of the East German Stasi. As a defector, and traitor, he was a prime target for the East German secret police. His family tried to persuade him to return to East Germany promising that nothing would happen to him, a farce nonetheless dictated by the Stasi who wanted to apprehend Schumann for their own purposes. He began contemplating returning to East Germany for a visit, but this idea was only abandoned when a West German policeman persuaded him not to go back. Lonely, and depressed, Schumann declared there was only one point that he truly felt free and this was on 9 November 1989, when the Berlin Wall was torn down. It was only after this that Schumann was able to return to his native Sachsen. His return to his home had mixed results, as many people welcomed him and yet others shunned him labeling him as a traitor even though East Germany no longer existed.

With the destruction of the Berlin Wall and the dissolution of the communist East, Schumann was again thrust back into the spotlight as a national hero and he feigned happiness and adulation about his situation as he posed for pictures and signed posters and pictures. He made appearances at the Checkpoint Charlie Museum in the years after reunification often signing pictures for tourists. His signed posters and pictures would become a best selling souvenir at the Museum and tourists regularly formed long queues for a chance to meet the young non commissioned officer who had defected to freedom during one of the high points of the Cold War.

Following returning home from a from a family rowing trip, on 20 June 1998 the weight of his depression proved to great for the Cold War icon and Schumann committed suicide. He hung himself in his orchard near the town of Kipfenberg where his wife Kunigunde would find him hours later. Described by his neighbors as a quiet man, all he had to show for the impact of his defection years ago was the portrait of his defection from East Germany hanging on a living room wall and a photograph of himself standing with American President Ronald Reagan.