In Cold Blood along the Wall: The Killing of Peter Fechter 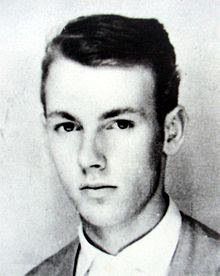 The Soviet Union and the communist satellite nations it subsequently developed within it's sphere of influence often went to extensive measures to make it appear that they operated and functioned to the best interests of its people. Outwardly, they embraced the ideals of freedom from oppression and equality amongst all collectively sharing everything and making great advancements in the achievements of mankind. Large emaculate festivals were frequently held and the ideas of labor highly regarded as essential to the success of the state. However, behind this facade of loving united fronts and value for human life was often a sinister truth. Desent and criticism of the state was an intolerable notion. Those who criticized the communist government or expressed ideals that were not compatible with those of the state risked imprisonment or certain death. Imagine living in a virtual prison state where the government dictated what you could do, when you could do it, how to do it and while declaring that you have 'rights' as a citizen of that nation, your rights are slim if any. Television, radio and all other media outlets are closely controlled by the state and to make matters worst, you can't even feel safe to express your true thoughts or feelings in your own home for fear you may be overheard and members of the secret police may show up in the middle of the night to arrest you. Wouldn't you begin thinking of ways to escape? Many would attempt to flee their prison nation; some would succeed and others would not.

On 13 August 1961, the East German government deployed soldiers of the Nationale Volksarmee and teams of construction workers to positions along the border of Allied controlled West Berlin and construction began on the Berlin Wall. The first concrete blocks would be put into place on 17 August 1961. With the Wall now turning West Berlin into an exclave deep in the heart of East Germany, it became much harder for persons wishing to leave the German Democratic Republic from doing so. No one could leave the communist nation without expressed permission from the government and all attempts to do so without authorization were met with armed resistance ordered to shoot anyone trying to leave without permission. The Schießbefehl or 'Shooting Order' became official policy on 22 August 1961, and the first person to be gunned down attempting to escape the repressive regime of East Germany would be twenty four year old Günter Litfin, a tailor who while attempting to escape by swimming across the Spree Canal was shot and mortally wounded by officers of the East German Transportpolizei. Litfin, would be the second confirmed casualty tied to the Berlin Wall, but he would be the first to die by being shot. Sadly, he would not be the last. After a tumultuous several months early on, life with the Wall began to normalize however escape attempts still became common place.

By the onset of 1962, the Wall and the defensive network that were associated with it had been vastly improved creating new challenges for those that wished to escape. By August of 1962, one young East German named Peter Fechter had like so many others decided that enough was enough and now he would take on the risks associated with crossing the Berlin Wall to seek better opportunities in West Germany. Peter Fechtner was 18 years old when he decided he would defect along with his close friend Helmut Kulbeik. The two young men developed a daring plan to first hide in a carpenter's workshop located close to the section of the Wall on Zimmerstrasse. They would then watch the Grenztruppen guards closely and after it was clear to do so, they would jump from a window over the initial barricade into the area known as the "death-strip", a strip of cleared area running between the main Wall and a parallel fence which was heavily patrolled by border guards and sentry dogs. Upon entry into the death strip they would attempt to run across it and climb over the 6.5 foot Wall which was topped with barbed wire and then fall into the safety of the Kreuzberg district of West Berlin not far from Checkpoint Charlie. 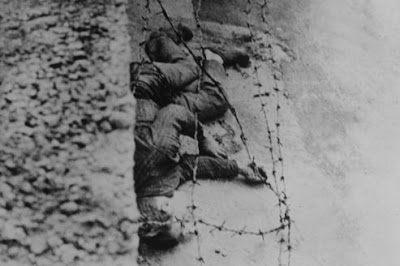 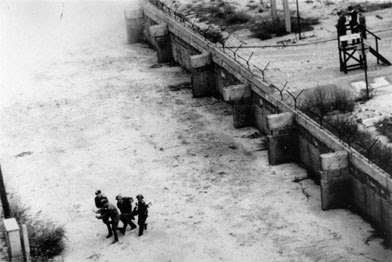 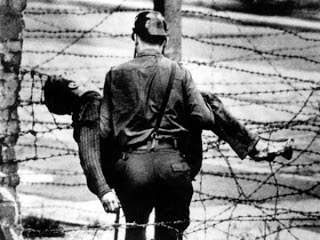 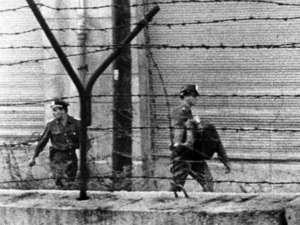 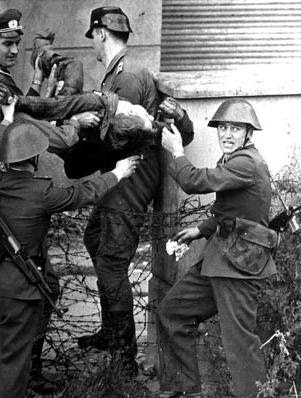 The date of execution of their plan would come on 17 August 1962. Initially everything went as planned, they hid in the carpentry workshop and dropped into the death strip sprinting across and reaching for the Wall itself. As they began to climb the concrete wall section, they were spotted by members of the East German Grenztruppen who began firing their weapons at the would be defectors. Fechter's friend Helmut Kulbeik managed to get over the wall, but Fechter still clinging on to the wall trying to pull himself up and over was struck in the pelvis by rounds from the East German rifles. On the West German side of the Wall, a large group of onlookers had gathered to watch the escape attempt and the wounding of Fechter was witnessed by hundreds of Western onlookers. Wounded, Fechter could not maintain his strength and fell back into the death strip on the Eastern side of the Wall but remained in plain sight of the horrified Westerners. Several people in the gathering crowd turned out to be western journalists who now had witnessed first handed how East Germany dealt with people it deemed as traitors.

Fechter lay in the death strip screaming for help, screaming in pain but his cries went unnheeded. The East German government issued orders not to provide medical assistance for persons wounded in escape attempts and to add to this, East German border troops were afraid of being fired at by West German policemen stemming from an incident several days earlier. Furthermore western citizens did not react to Fechter's cries for help out of fear of being fired upon by the East German border troops. All in all Fechter had no real chance of survival, the impact of the high caliber rifle round into his right hip had caused severe internal injuries and he was losing blood rapidly. He would lay in the death strip for one hour before he succumbed to his injury, bleeding to death before a shocked western audience. When his cries ceased, it was only an hour later still, that East German border troops and policemen finally entered the death strip and retrieved his body.

The subsequent stories regarding the shooting of Fechter enraged the West German government and brought a wave of negative publicity to the East German regime. Hundreds of people in West Berlin organized demonstrations against the German Democratic Republic, shouting "Mörder!" or Murderers! at the East German Grenztruppen border guards. As a direct result of the Fechter murder and the following backlash, the East German government revised its orders to the border troops with revised protocol including more direct restrictions on the use of shooting in public settings particularly in front of a crowd of onlookers. Furthermore, the government authorized the granting of medical assistance to any would be escapee who was wounded in an attempt to flee from East Germany. Although Fechter would not live to see the fall of the Berlin Wall in 1989, in the years leading up to the end of the division of Germany he became a martyr in the struggle for German reunification. Memorials would be erected in his honor and those of others murdered trying to escape. Numerous tributes would be dedicated in his memory and his death would became the subject of many films, documentaries and books. Although he would not be the last person to die trying to escape over the Berlin Wall, he was instrumental in reforming policy in dealing with would be escapees. 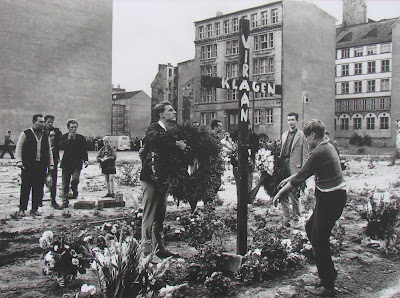