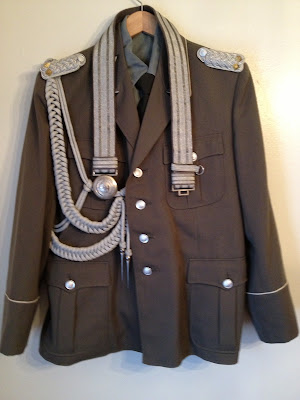 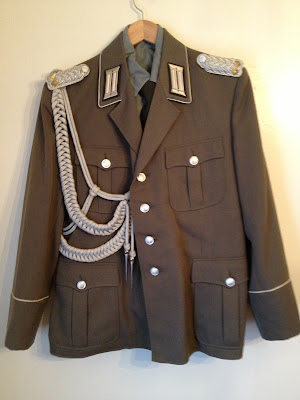 The uniform displayed here shows the Paradenuniform or Parade Uniform of a Oberstleutnant in the Landstreitkräfte's Mot.-Schützen, or Motorisierte-Schützen which translates into Motorized Infantry known in western armies as Mechanized Infantry. The uniform is made of the smooth gabardine material in the military stone grey color common of all East German military uniforms. When wearing the Paradenuniform, the steel East German M-56 Stahlhelm 'Steel Helmet' was worn instead of the round visor cap. 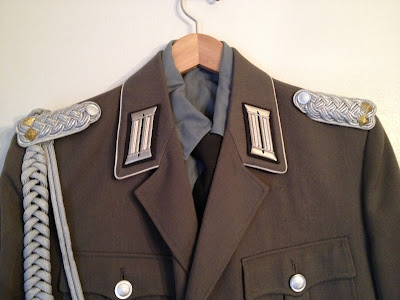 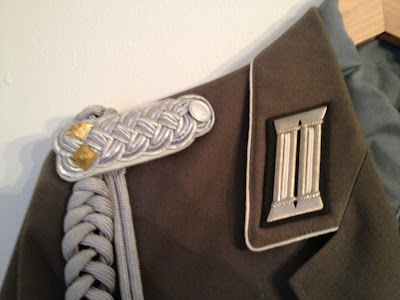 Shown here is the distinctive Kragenspiegeln 'Collar Insignia' of officers of the East German Landstreitkräfte. Landstreitkräfte collar insignia were essentially the same worn by soldiers of the former Wehrmacht with a distinct difference in that they were sewn to the grey uniform collar and they lacked waffenfarbe branch colors. 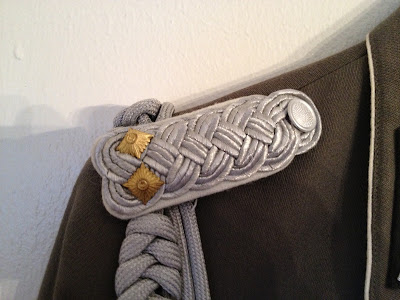 Shown here is a close up of the shoulderboard epaulette insignia for an Oberstleutnant, the equivalent of a Lieutenant Colonel in western armies. In the Landstreitkräfte, the rank of Oberstleutnant was the second highest ranking field grade for officers and consisted of silver braiding and two gold four pointed stars commonly referred to as 'pips'  against the white background of the Landstreitkräfte infantry service. 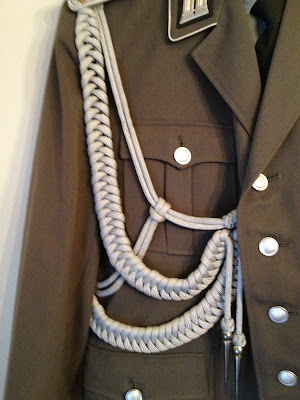 Worn on the right side of the Parade Uniform is the silver Achselschnür or Shoulder Cord which was  issued to all East German officers and worn primarily for ceremonial occasions such as Parades and on the Gesellschaftanzug uniform jacket. The elaborate braided silver shouldercords with pointed silver Metallspitzen or Metal tips on the aiguillettes were originally introduced into Landstreitkräfte service in 1976.

Also on the left side of the uniform, there were certain distinctions that may be worn, but most Nationale Volksarmee issued awards and decorations were worn on the right side of the uniform either in the form of ribbon bars or in the case of special ceremonies a medal bar of the wearer's medals sewn in order of precedence against a felt background which was then pinned to the uniform chest. 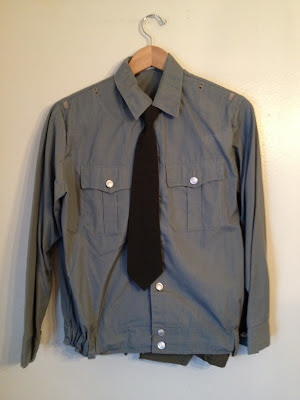 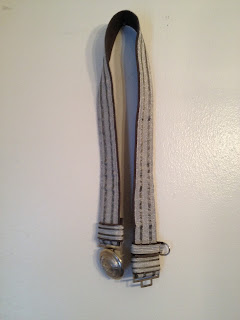 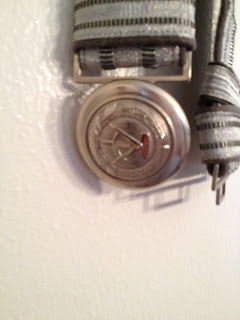 Here is the officer's brocade belt with East German coat of arms on the ceremonial buckle. It was worn with the parade uniform and Gesellschaftanzug uniform. Attached to the belt was the hangers and Ehrendolch or Honor Dagger which was presented to each officer in the Nationale Volksarmee upon graduation from the respective service academy of the East German armed forces. 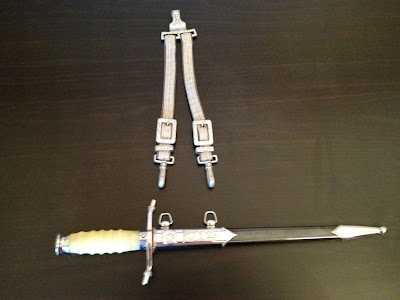 Here's a close up of the ceremonial dagger hangers and the dagger in it's decorative metal sheath. 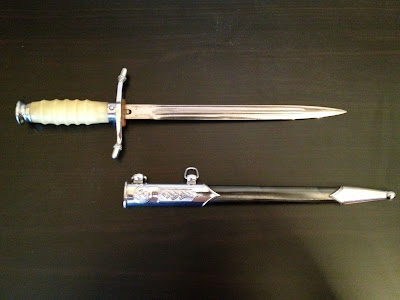 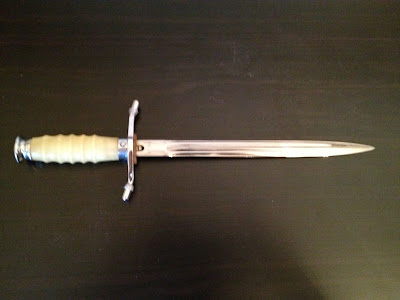 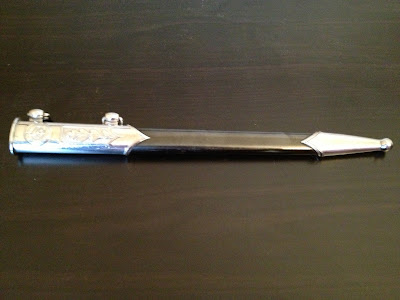 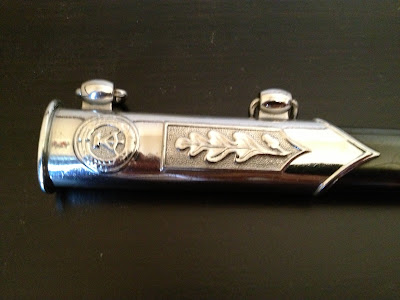 The intricate decorative engraving and raised East German coat of arms on the sheath of the Ehrendolch and the dagger itself as presented to each graduating officer. Every officer was responsible for the upkeep of their presented dagger and each one was individually numbered with a serial number engraved into the base of the blade where in mounted to the hilt. 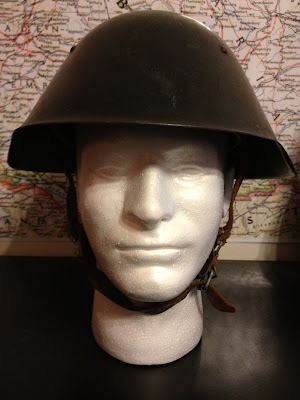 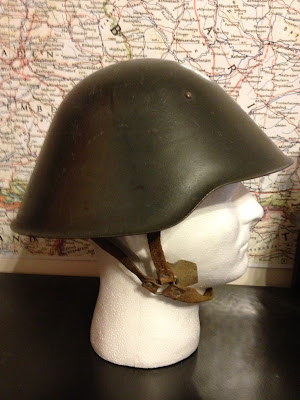 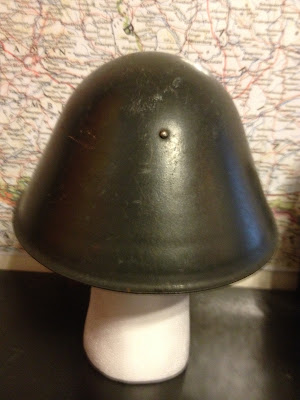 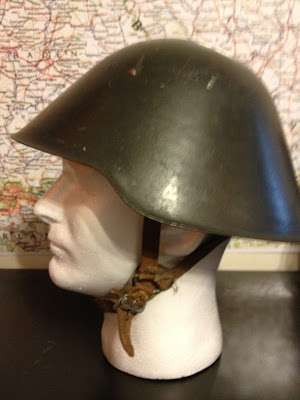 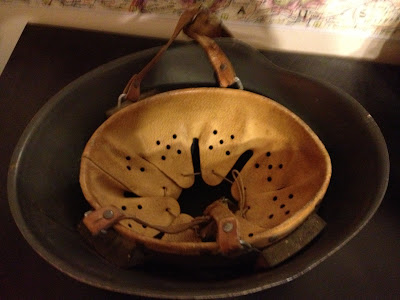 The East German M-56 helmet was originally designed in 1942 as a replacement for the M1935/M1940 model Stahlhelm combat helmets in service with the Wehrmacht. The design was subsequently rejected for adoption by Adolf Hitler and never progressed remaining unused until the end of the war in 1945. By the 1950s, with the formal establishment of the German Democratic Republic a requirement for a new German helmet for use by the forces of the Volkspolizei and the Nationale Volksarmee soon arose. With the reinstatement of a new East German Army, it soon became realized that the reintroduction of the traditional Stahlhelm which was worn during the Second World War would not have been tolerated by East Germany's Soviet allies. The 1942 design was likely chosen because it was the most similar of all German designs to resemble the helmets in use by the Soviet armed forces, in particular the iconic SSh-40 design. In essence, the new M-56 helmet was so similar in appearance to the SSh-40 that some Western observers failed to realize its German origins altogether and assumed the East Germans had merely adopted a new  Soviet design.

The helmet was revolutionary for its design with a liner riveted into the steel shell and upon ballistic contact to the helmet, the steel shell was ripped away absorbing the force of the impacting projectile and leaving the wearer to reach some force of cover. 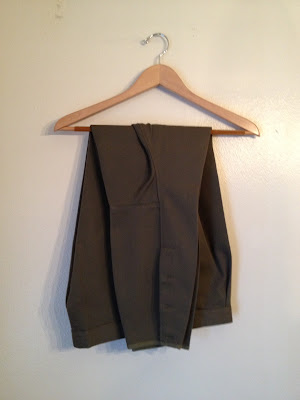 The Parade uniform would be worn with the unpiped riding breeches and the polished black jackboots when participating in special events such as the annual Ehrenparade 'Honor Parade' which celebrated the founding of East Germany and the May Day celerations which celebrated the triumphs of communism. These parades were often conducted in East Berlin before an audience of senior communist party officials including Erich Honecker, leader of the GDR and visiting dignitaries from other communist nations. These parades were modeled heavily on Soviet military parades which were conducted through Red Square in Moscow but with a distinctive Germanic twist. Soldiers maintained the traditional Prussian 'goosestep' straight legged march which was subsequently outlawed in West Germany for its affiliation to the previous regime.

The marching formations of the parades were usually performed accompanying the sounds of a special military band playing traditional marsches or marching songs written by famous German composers of the classical age ranging from Wolfgang Amadeus Mozart to Ludwig van Beethoven. 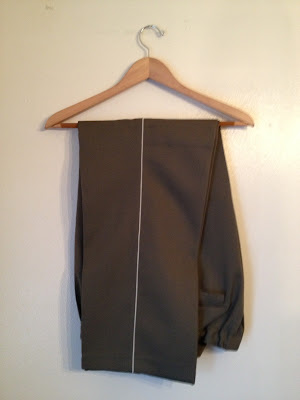 With the Dienstuniform or Service Uniform variation, the straight legged pants with white piping of the Landstreitkräfte were worn in place of the ceremonial riding breeches and the M-56 steel helmet was replaced with the standard issue round visor service cap. 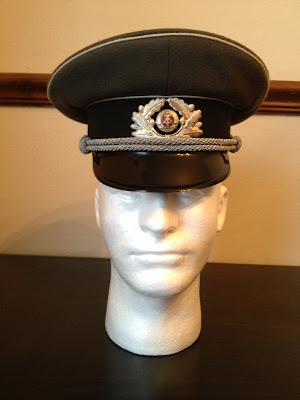 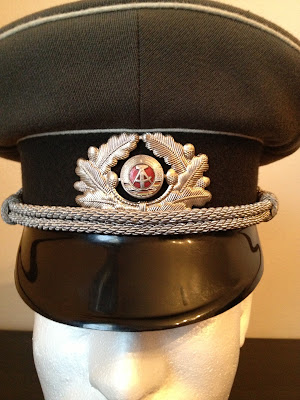 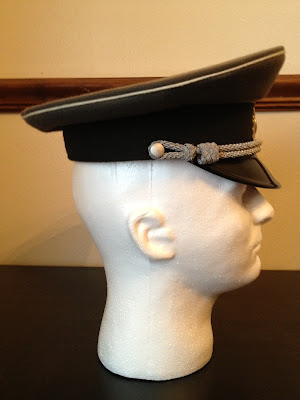 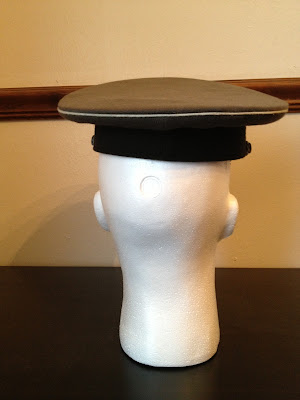 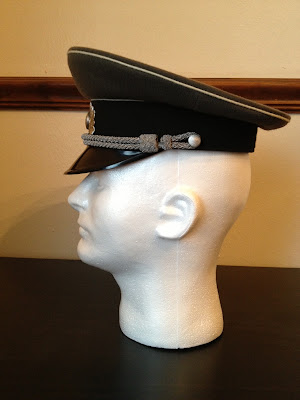 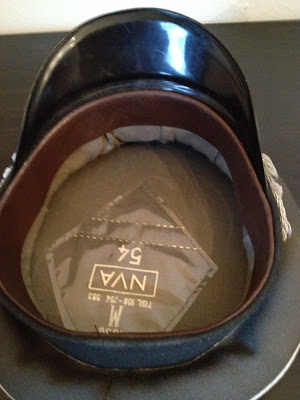 The visor cap shown here for a Landstreitkräfte officer in the stone grey color of National Volksarmee uniforms along with its associated white piping of the East German Ground Forces. It retains the East German national roundel in the center surrounded by a metal wreath insignia and officer's silver braiding cap cord around the base above the visor. 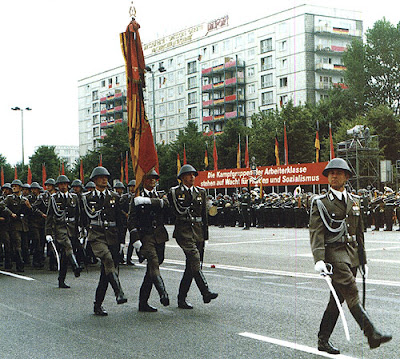 The Landstreitkräfte of the German Democratic Republic's Nationale Volksarmee was the principle land combat branch designated to protect East Germany's territorial integrity. The Landstreitkräfte itself was officially established in March 1956, from elements of the Kasernierte Volkspolizei which were formed in the post-war years to police the eastern territories under Soviet administration. The majority of the  Landstreitkräfte's equipment over the duration of its existence would be of Soviet design and origin and it's field units were organized along the lines of Soviet Motorized Infantry Divisions. In this respect forces of the  Landstreitkräfte also operated in close proximity to the Soviet Army's Group of Soviet Forces Germany or 'GSFG' which were positioned in Germany at the cease of hostilities in 1945 . The Kommando Landstreitkräfte or Land Forces Command was established in the city of Geltow in December of 1972 with Landstreitkräfte defensive zones being divided into two distinct military districts. These districts or Wehrbezirken were Military District North with its headquarters being located in Neubrandenburg and Military District South with its headquarters being located in Leipzig.

Throughout its existence Landstreitkräfte was never deployed in active combat however, it was often reported that it's personnel went to numerous socialist and communist nations as military and technical advisors, particularly Cuba and various countries in Africa. In 1968, the forces of the Landstreitkräfte were mobilized to assist Soviet forces in intervening during the Prague Spring uprising in Czechoslovakia. The uprising occurred when reformist Alexander Dubček attempted to grant additional rights to the citizens of Czechoslovakia by acts of partial decentralization of the economy and democratization. Soviet forces and their Warsaw Pact neighbors responded by invading the country, sending thousands of soldiers and tanks pouring across the border and seizing control of the country. The Landstreitkräfte was then essentially stood down and their deployment into Czechoslovakia cancelled at the last moment thus ending any East German involvement in the invasion of Czechoslovakia.

The Landstreitkräfte maintained a force of nearly 120,000 troops of which at any given time about  60% of which were draftees. It maintained two fully strengthed armored divisions, four motorized rifle infantry divisions, two surface-to-surface missile brigades, ten artillery regiments, one anti-aircraft regiment, eight air defense regiments, one airborne regiment, two anti-tank battalions, and various other support units.

The video clip shown here is taken from the German Democratic Republic's state television broadcast of the live coverage of the Ehrenparade celebrating the founding of East Germany in October of 1987. The parade was held in East Berlin, and as shown above you can see officers in Parade uniform performing the goose step march accompanied by the sounds of a military band as they make their way towards the review stand to pass before officials of the SED communist party including Party Secretary Erich Honecker and dignitaries of other communist nations.
Posted by Unknown at 7:31 PM